The Long Road to Master

One of my longtime goals was to become a national master in chess, a game I’ve been playing since I was nine. In chess, an elo rating system is used to standardize each player’s approximate strength. In the US, to get to National Master, a title only the top 1% of players obtain, one must get to 2200 elo, and I got 2198, just 2 points shy! In this blog, I’ll take you along my chess journey in the past couple of months.

For the past few months, I have been studying a ton of theory, watching courses, doing drills, and practicing against strong opponents. After putting in the work, I have noticeably gotten much better, but I had to face the real test: using what I learned in a real competitive tournament game. 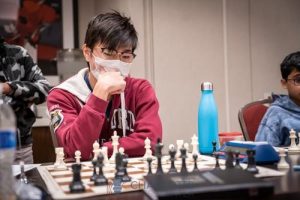 I set my sights on the NC Championship in October in Charlotte, a tournament that joined dozens of players from all around the state to compete for the state champion title. I was deeply committed to getting a good result, as I was rated 2133 and was close to reaching the threshold. I came in seeded around 10th out of 40 in rating but finished tied for 4th after winning 4 and losing 1 game. These games were real stepping stones, as it was the first time in a tournament game that I had implemented the openings I just learned, so I definitely learned a lot, especially from my one loss.

After this tournament I was rated 2155, a 22-point jump. Then, I sought to play in the US Masters on Thanksgiving weekend. This time, it was much different. The field was far stronger, and there were over 40 international masters and grandmasters, which are titles that are leagues above National Master. In fact, the tournament required you to be a master to play, hence the name. There were 200 players from all around the world, and I was seeded just 190th by rating. With such a strong field, it was going to be an uphill climb to get a good result, but at the same time, playing all these incredibly strong players was going to be a great opportunity.

I analyzed my games, practiced more, and memorized more theory for a month, striving to overperform. Then, it was go time. My first two rounds were rough, losing against two FIDE Masters (one step below international master), but they were very close, hard-fought battles, and the fact that I could even have chances against them was a sign of improvement. Because of my early losses, I was bounced to the back of the standings so I had to play players who weren’t rated as high as the first two. In the next 6 rounds, I bounced back quite remarkably with an undefeated streak, winning 4 games and drawing two, all against players who were rated much higher than me. By the 9th and final round, I reached the top quadrant of the standings with 5 points, and I was by far the lowest-rated player to do so. I even scored higher than a lot of top grandmasters and international masters. That set me up to play one of America’s top prodigies in the last round, an 11-year-old international master. It was a shameful defeat for me, but I still held my head high as I knew my overall performance would get me close to, if not to, 2200. A few days later, I saw that I’d jumped to 2196, a little bit disappointing but also encouraging.

With such a short distance to master, I strove to play some casual Saturday tournaments where I play much lower rated players and easily pick up a point or two without a ton of risk, but that only got me up to 2198.

The journey still goes on, and I hope I can get it in the next tournament without losing and digging myself into a deeper hole. Hopefully next time you hear from me, I’ll be a chess master!