These past few months, I have focused on travelling to cities of cultural and historical importance near me. In this blog, I share what I have learned and how I have changed through my experiences. 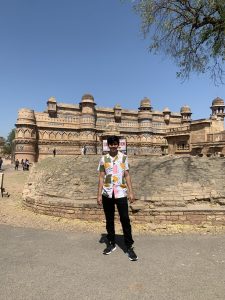 The first stories I was ever told were Mahabharata and Ramayana. As I walked across the Gwalior, my fascination with these Indian epics re-emerged. As a child, the stories of flying chariots and ten-headed demons enthralled me. Yet, whether it was my idea that ancient history had little impact on my life or the burdensome names and timelines I was forced to memorize, my interest in history slowly waned.

Starting in February I began to plan trips to places I wouldn’t ordinarily travel to. The first place I visited was Omkareshwar. Apart from its natural beauty, Omkareshwar is known for being a holy city. In the past, I haven’t had a particular interest in visiting temples, but Omkareshwar was a refreshing experience. In a town without much modern development, what surprised me was how prominent and ubiquitous places of worship felt. My road trips often had impulsive detours to another well-preserved, random temple in the middle of nowhere. Without tall buildings to blur the history of the town, almost every corner had another centuries old temple.

I observed the same pattern in Maheshwar. Though I had heard of Ahilya Bai, the queen who dedicated her life to the people after deciding not to commit Sati, I was unaware of how devoted she was. Apart from the famous textile industry, the Ahilya Bai fort contains hundreds of religious statues and dozens of temples in and around the fort. One, unsurprisingly, is even located in the middle of the river Narmada, which itself is considered a holy river.

Gwalior, however, was the most interesting of the three places. The walk within the fort is about 12 km which covers the palaces and various museums. The fort, where, interestingly, one of the oldest records of zero was found, was occupied by kingdoms ranging from the Sikh to the Maratha, the Mughal, and the East India Company (the most evil company in the history of mankind). This can clearly be seen in the varied architecture within the fort (which also contains large Jain monuments). 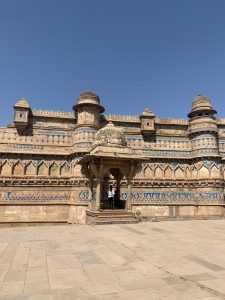 Though, what captured my attention were the museums in the fort which displaced archaeological findings from across India. I saw hundreds of truly mesmerizing artifacts ranging more than a thousand years, all of which depicted different gods and goddesses, most prominently Shiva, Ganesha, Krishna, and Buddha. I was awestruck by the idea that for more than a millennium the same stories which I heard as a child have been recited across India. That more than a thousand years ago an artisan carved stone to show their interpretation of the Mahabharata. 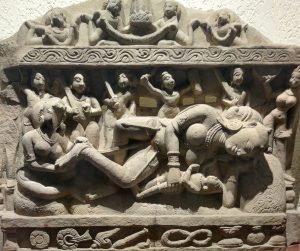 An artifact depicting Krishna being born and taken at birt

I hadn’t paid heed to the thought that India’s culture, our poems, and our art have been defined by mystical stories of gods. Apart from holding religious value, religious texts have shaped India more profoundly than even colonization, and in fact, our sacred art and places of worship are one of the few things which have stood tall in the face of centuries of deliberate destruction.

To me, however, all of this history raises very important questions. India is wide and varied. What then does it mean to be an Indian? What does it mean to be me? Which part of this unending history do I call mine? Which part of the Gwalior fort should I look up to? Regardless of my answers to these questions, I know one thing for sure. As someone who doesn’t subscribe to the idea of organized religion, I have learned to pay much more respect to our past. True or untrue. Proven or Unproven.