As I embarked on my Duke Gap Year I promised myself that I would try to learn something and grow as a person from each every experience I chose to undertake, and I have definitely kept true to that goal.  Living for two months in Puerto Pilon, Costa Rica, offered unique and spectacular opportunities to follow through on my education through exploration but I learned even more than hoped on this incredible journey.
I was able to explore the surrounding ecosystem with the CR nature guide found in the book box in our bungalow.  I worked on my Spanish the entire time but with laser-like focus while ordering food, and I even learned that 30 spf sunscreen does little to protect my skin. Believe it or not though, with all the amazing things to learn from during my time in that small town, the most beneficial classroom was the water.  It was almost like I was in my own covid cohort and my surf curriculum included Physical Education, Geography, Science and Accelerated Spanish all in one beautiful setting. 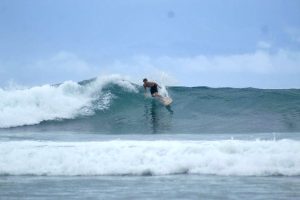 Spanish in the surf line up was a core class and one of my favorite subjects. The learning environment was different from high school, and contrary to the peaceful classroom a good bit of my learning was done through loud exclamations and conversations whilst being pounded on the inside by a surprise set of waves. I would learn a lot of explicit phrases from interactions with the locals, but I would also learn about descriptors of waves, drama between friends, tales of the work day, and even how to defend myself from angry Frenchmen (who curiously also spoke Spanish).  Between sets though, I was able to practice telling people about myself, my home, and what brought me to this small town, along with asking and learning about other people’s lives and families. Everything I learned about the surrounding area also came from my conversations in the surf. With the overlap between Spanish and geography I learned about the Osa, wildlife sanctuaries, other surf breaks, and empanada spots for our return trip up north. Google Translate consisted of hand signals. My vocabulary grew immensely through the basic actions that accompanied new words.  I learned how to say alligator and crocodile as lifesaving advice as to which rivers we could swim in and which to avoid. This may seem like a very unorthodox way of practicing a new language but I would take doing so on one of the best surf breaks in the world over an online zoom or classroom any day of the week.
The Pacific Ocean also provided research topics for Science class. After every surf session I would come back with a new animal or phenomena I needed to learn more about. After being stung several days in a row by something called Hilo de Oro, I decided to do some research and ask around about it. After talking with several locals I realized I was lucky that I barely reacted to this jelly fish, where they came from and how common they were. My learning regimen continued with tides, currents, turtles, flying fish (who knew those things were real!), dolphin surfing the waves alongside me, and where the incredible shells came from.  I also decided to look into bioluminescence after one of our early morning surf sessions in complete darkness, where each turn and paddle stroke was marked by a ripples of blue water. That incredible morning was one of the coolest moments ever, and gave way to an appreciation of one of the most amazing and beautiful events in nature. It was special knowing that nearly every event in the world is captured on camera these days and shared with the world, and yet these moments were experienced by me, my three friends.  I wouldn’t necessarily say I could skip college level science classes based on this experience, but it sure would be tempting.
Everything I learned from the simple activity of surfing embodied the idea that with the right curiosity and mindset you can learn quite a lot from just a little. I expect the classrooms at Duke to look a little different but I plan on bringing that same inquisitiveness and thirst for knowledge that I did every day to the Selea surf break.