This past week, Israel had two of its most important holidays: Yom HaZikaron and Yom Haatzmaaut. Yom Hazikaron, the Day of Remembrance, is a day full of sadness, stories, and broken hearts, as the entire country remembers its fallen soldiers who died to protect the country. Then, right when the sun sets on Wednesday evening, the entire country shifts in a flash to celebrate Yom Haatzmaut, Israel’s joyous Day of Independence. So how does an entire country transition so seemingly seamlessly from sadness to celebration? And why are these two contradictory holidays so close together?

Yom Hazikaron started with a trip to Jerusalem. Some of us on the program, including myself, left very early to spectate the bitter struggle between an organization called “Women of the Wall” and the religious men who pray at the Western Wall everyday. We watched as the members of the organization tried to bring in a Torah to pray with at the female section of the Western Wall, while religious men and women blocked their path. The whole situation was extremely messy, with both sides truly dedicated to their point of view. The Women of the Wall sincerely believe in the statement they are making for all Jewish women, illustrating their strong push for equal opportunity between men and women within the religion of Judaism. At the same time, the religious men and women believe that trying to change the time-honored customs of the ancient religion is foolish, and that God does not want these traditions changed. It was very interesting to be a bystander to this conflict, watching how both sides at the Wall thought the other was delusional.

Following the event at the Western Wall, we went to our old campus at Kiryat Moriah in Jerusalem (where we spent the first semester studying), to listen to speakers and watch films about Yom Hazikaron. To begin the day of remembrance, we stood in silence on the grass, waiting for the long wail of the siren. Throughout the whole of Israel, a siren flares up in remembrance for the fallen soldiers. All life stops, and every single Israeli stands for a minute or two, simply listening to the scream of the siren and honoring the day. Various Israelis came to the campus to speak about their lost siblings, children, friends, and fellow soldiers. I felt such a deep connection to the fallen soldiers, realizing that I have been living in a country that these brave troops died to preserve. My connection to the day was magnified, not only from living in Israel for the year, but also because of my age. If I was born in Israel, at eighteen years-old I would currently be in the Israeli army, enlisting along with all my friends. The story of one soldier, Benaya, was especially impactful. Benaya’s brother explained to us how Benaya served in a unit that discovered and cleared out the underground tunnels used by terrorists. After leaving a seemingly clear area, Benaya’s squad walked back to the rest of the unit. A terrorist, hidden beneath a secret entrance, popped out and fired round after round from a machine gun at the retreating soldiers. Miraculously, every single bullet struck Benaya and no one else, as the rest of the squadron quickly took out the terrorist. Benaya’s brother showed us a film of Benaya’s life. Clips were shown of Benaya as a kid, Benaya with his brothers, and most impactfully, Benaya returning home from duty one weekend to surprise his mother. I could easily picture my own family, and I could imagine the crippling, heartbreaking toll it would take on them. Later, a couple of my friends and I bused up North to Holon, where we ran a 5K along with hundreds of other Israelis in remembrance of Benaya. I witnessed each of his family members speak, viewing pain just as fresh as in the video we were shown earlier. Finally, at the end of the day, my friends and I made our way to the bridge overlooking the highway by our apartment. We waited there for the last siren, watching as speeding cars slowed down, pulled over, and stopped. Israelis got out of their cars, and we all stood together as one community. 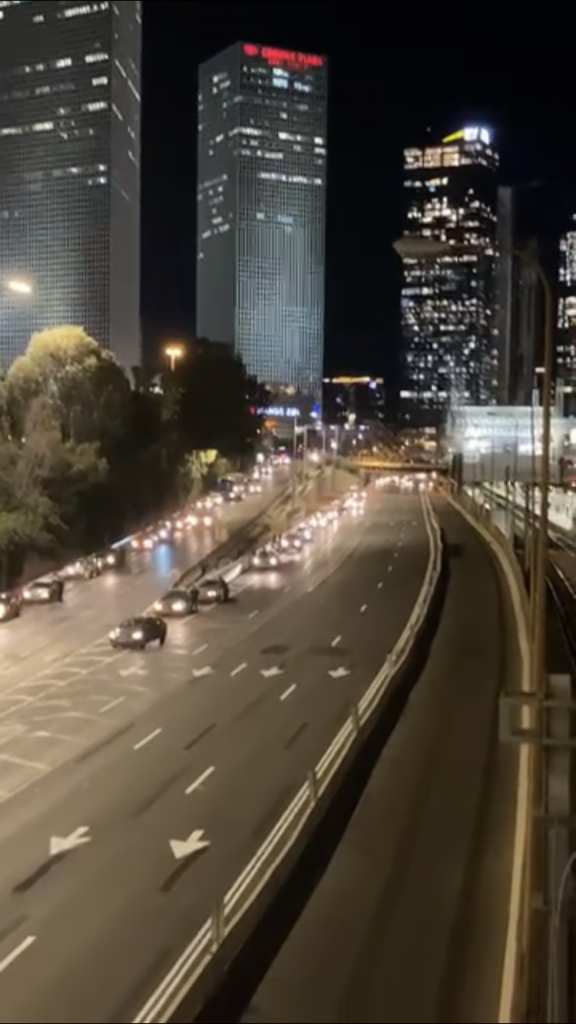 While somber, I felt such a sense of communal support, knowing that throughout all of Israel, we were all hearing and thinking and remembering the same ideas.

Then, in a flash, Israel transformed. The sun went down, flags went up, music started blasting, and people began flooding the streets. Israel’s day of independence had arrived. I asked my Israeli friend where I should go Wednesday night in Tel Aviv to celebrate Independence Day. He replied: any street! We quickly mobilized, and went to one of the busiest streets in Tel Aviv. 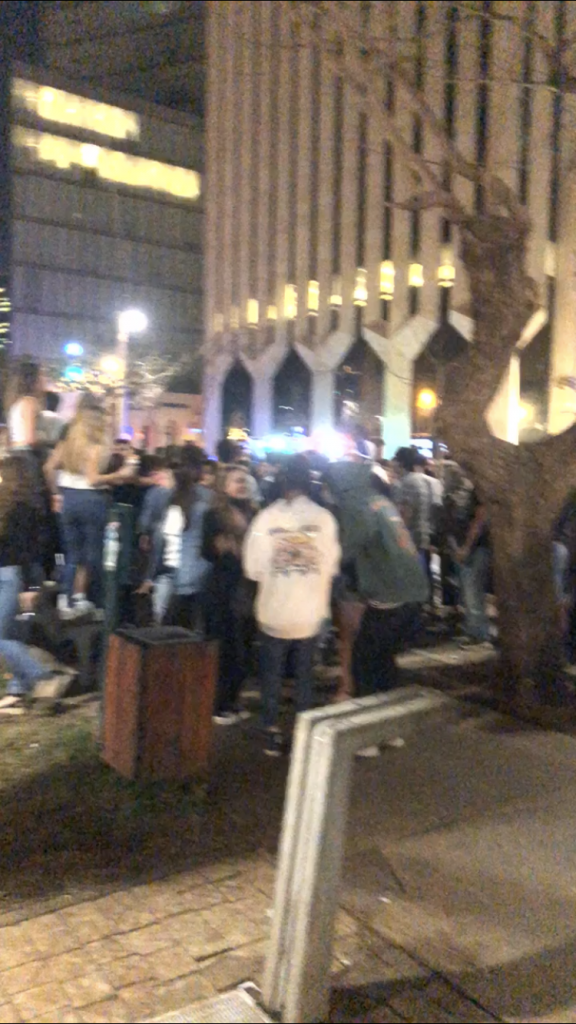 Already, hundreds of people were dancing, laughing, singing, and spraying fake snow out of canisters for some strange reason. Large pick-up trucks pulled up, with giant speakers in the back. These “Nachman” (named after Rabbi Nachman, a venerated teacher of old) vehicles were driven by religious Jews, playing festive Israeli and Jewish songs. My friends and I danced all night with Israelis from all over, celebrating the holiday. The party continued throughout the whole next day, everyone full of joy for the existence of the Jewish state of Israel. 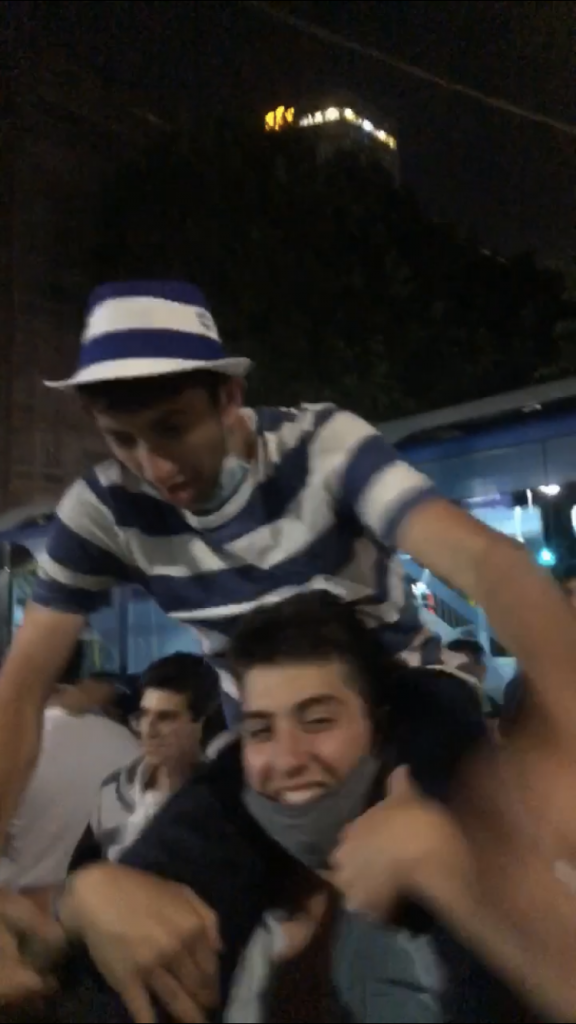 So how does a whole country shift moods in just a flash? How do we jump from a solemn day of remembrance to a joyous one of celebration? Perhaps the two days are not so different after all. The men and women that died serving Israel died with love and dedication for the country in their hearts. They sacrificed their lives to protect Israel, preserving its existence for now and for the future.

Yes, we can never forget the lives lost, never fully overcome the pain of the fallen young men and women, torn from their families and friends. However, we can celebrate what they died to protect and be grateful for the gift of protection and existence that they gave the people of Israel. In some ways, the days are one and the same. We would not have fallen soldiers if we did not receive independence, and no independence without soldiers risking their lives on the battlefield. Israel as a whole must be able to never forget the past and prices paid, but never stop being grateful for their sacrifice and hopeful for the future.