The summer before I entered high school, my grandmother took me on a two-week trip to Paris. I had never been out of the United States before, and had only been out of California to visit my great grandmother in St. Louis. I eagerly packed my bags and couldn’t wait for the airplane to set off.

The minute we landed, I fell in love with Paris. I adored the Haussmann-style architecture, the small cafes that line the streets, the French pastries, the museums, the high fashion. We even found a taxidermy store that was featured in the movie “Midnight in Paris” tucked in the upper floor of a garden store. It is these unexpected treasures that make Paris so intriguing to me. 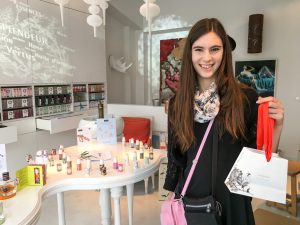 Me in a Parisian perfume shop during my 2016 trip.

After spending two weeks immersed in French culture, I decided I wanted to return to Paris one day, maybe even to live there. Prior to the vacation, I was all set to study Spanish as my foreign language in high school. This seemed to make the most sense since I live in California, but I discovered that my true passion was French.

As my quest to learn French evolved, this dream began to form in my head of studying abroad, either as a gap year or once in college (or both!). While travel is off the table for me this year, I knew that I wanted to use part of my new found time to further my language skills. I’ve done my best to create cultural immersion from home, with the help of an online French conversation class offered by my local community college.

The theme of the class is French cinema of the 20th century, and I have loved every minute of it (well, maybe not every minute, but more on that later). The teacher is French, and has a degree in film, meaning that she is very knowledgeable in terms of both film history and general French history. Everything we do is in French there is no English discussion- we meet weekly to discuss the previous week’s film in French, and then listen to the teacher lecture in French about the upcoming film for the following week. We go deep into the context, making, and content of each film. As part of her lecture, the teacher distributes a document that usually consists of around thirty pages of notes, links to extra interviews, and documentary clips. I never thought it possible for me to comprehend that much French, but I find myself having to look up less and less words. The class is scheduled for two hours every Thursday evening, but our discussions are often so lively that the class lasts close to three. 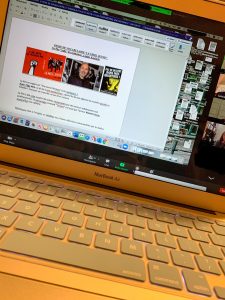 The most important part about this class for me has been the conversational aspect. This was always something I felt my French at school was lacking, and I developed a comfort zone rooted in reading and writing. This class for me has really been about stretching outside of these confines and just speaking, even if that means throwing in an English word here and there. It’s a very mixed-level class, which can definitely be uncomfortable at times. When you are placed in a breakout room to discuss certain aspects of the film for ten minutes with someone who is semi-fluent, it’s intimidating. The challenging part is being able to convey complex ideas in another language, often around topics that require more obscure vocabulary. I often have all these ideas swimming around in my head, but they’re English. It’s a constant game of translation, racking my brain for the right words. I would love to reach the point where this intermediate step doesn’t exist, where the thought just occurs in French. But while I’m on my way to that point, I’ve learned to just take a breath and jump in, remembering that every language learner shares in my struggles.