The Importance of Spontaneity

This month, in continuing with my gap year’s unintentional theme of spontaneity, I decided to take a last-minute trip to Colorado. My grandparents live in a beautiful log cabin deep in the mountains, and I thought that visiting them would be the perfect way to start off my travels this year! 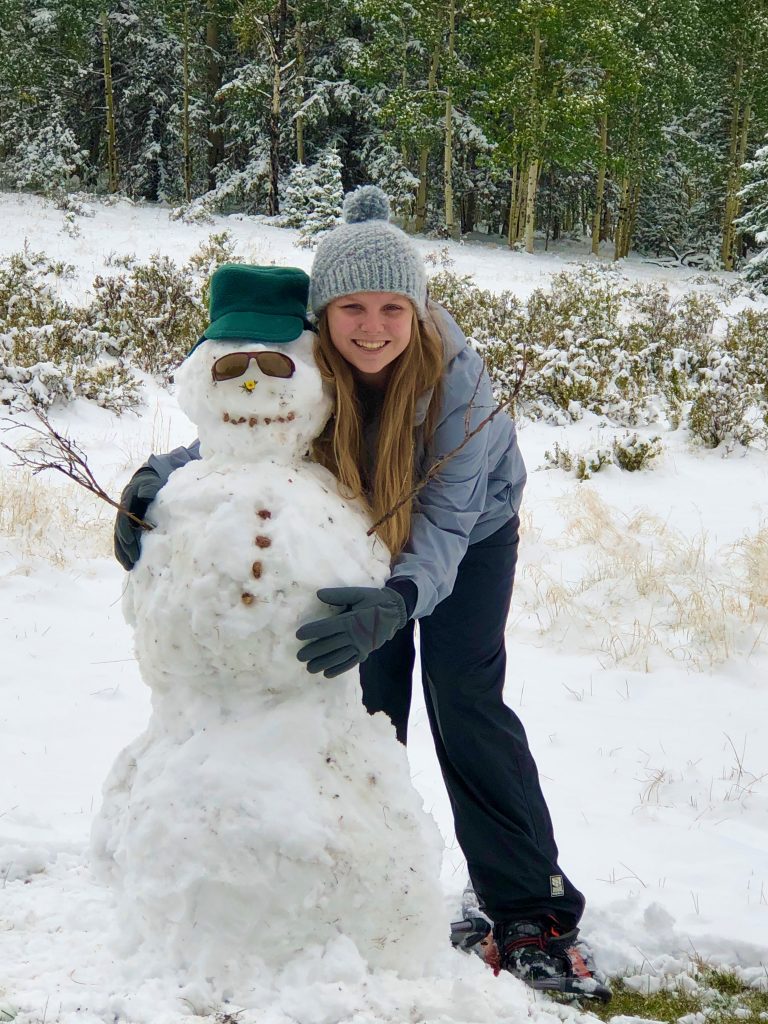 Though I had hoped the mountains would offer a reprieve from the sweltering Texas heat, when I arrived at my grandparents’ cabin, it was nearly 100 degrees. Additionally, due to nearby wildfires in Colorado and California, the sky was so smoky that I could barely see objects 400 yards away and my eyes stung when I walked outside. Suddenly, the week of outdoor activities I had planned was looking less and less appealing.

Considering the grim weather upon my arrival, I was quite surprised to wake up the next day and see that the ground was covered in a thick blanket of snow! The weather had taken a rapid shift– so much so, in fact, that while the previous day brought record high temperatures to the region, twelve hours later the snowstorm delivered record-breaking cold temperatures. Though a frightening sign of our unstable global climate, we welcomed the snow as it helped quell the nearby wildfires and cleared the smoke from our horizon.

With clear skies and cooler weather, we were eager to spend the day outside. As a native Texan, I have had limited exposure to snow and was excited when my grandparents suggested we go snowshoeing! After bundling up in winter clothes and strapping into our snowshoes, we headed off into the forest. I was astonished at how easily the snowshoes floated across the top layer of snow; I had expected it to feel like I was walking in flippers, but instead it felt almost identical to hiking. Unlike hiking, though, it offered an entirely new, beautiful snow-covered perspective of the landscape!

Perhaps the most significant aspect of our snowshoeing expedition was my learning to properly build a snowman. I had thought the only way to create a snowball was by scooping up a handful of snow and packing it together. I was astonished when my grandpa started rolling a ball of snow around on the ground and it stuck together to form a massive sphere! Our final product was a life-sized snowman, complete with a hat and glasses. 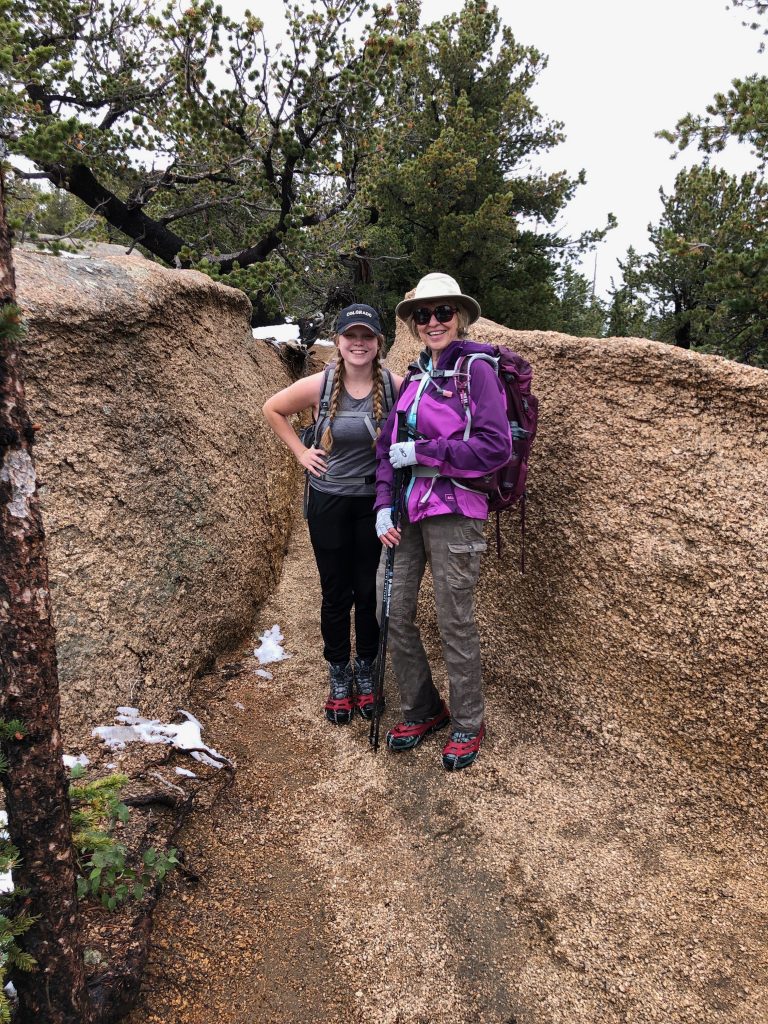 By the next day, the snow had melted enough to take a regular hike. We took a trail that is traditionally so crowded that my grandparents avoid it at all costs, yet with the recent snow and icy trail conditions, it was nearly empty. Though we had to wear ice-spikes to avoid slipping on the steep snow-packed slopes, the beautiful scenery was well worth the effort!

My grandparents have several geologist friends, one of which has his own quartz, biotite, and amazonite mine in his backyard. So the next day, he supplied us with pick-axes and gave us full reign to hack away at his mine and extract specimens to take home. Having taken a geology class in high school, it was exhilarating to be able to put my knowledge to use. I was astonished to find deep green, perfectly-formed crystals of amazonite concealed just feet below the inconspicuous surface!

After several more days of hiking and exploring, we decided to conclude my trip by climbing to the top of a “fourteener” mountain. To be deemed a “fourteener,” which is the highest classification of mountain in Colorado, a mountain must reach more than 14,000 feet above sea level. There are 58 “fourteeners” in Colorado, and my Grandpa has climbed them all– an incredibly impressive feat! 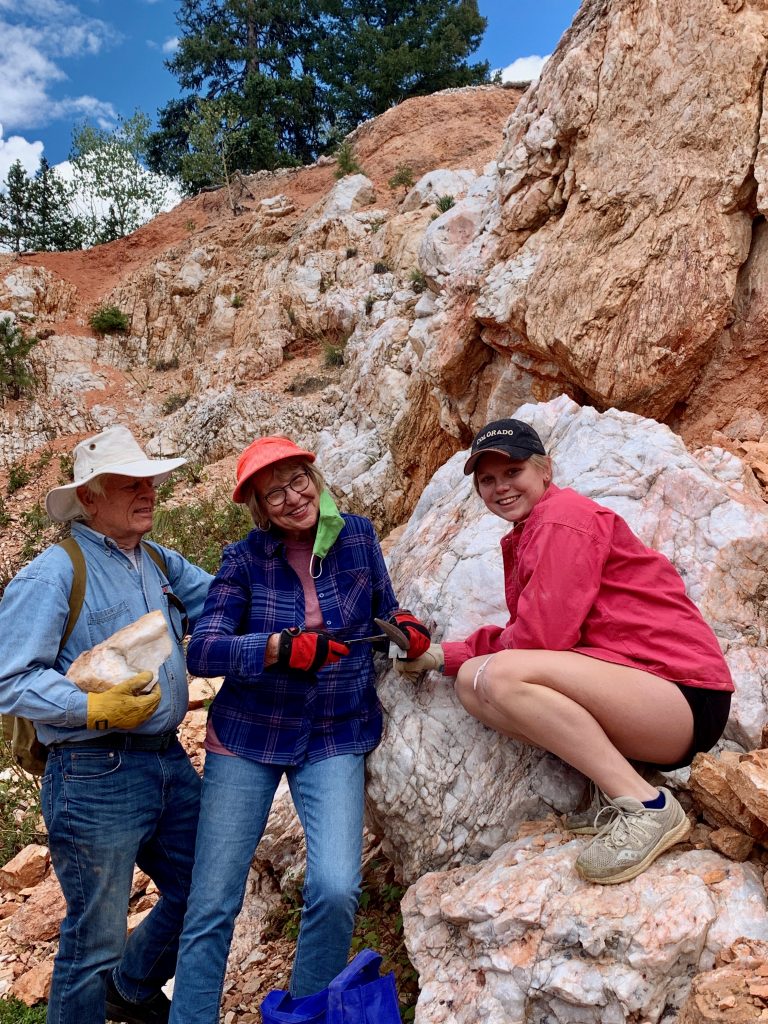 On the day of the climb, we woke up extremely early, arriving at the trailhead just after sunrise so that we could reach the mountaintop before the afternoon storms. The trail begins just below the tree line, so the majority of the climb takes place over barren granite, with no vegetation in sight. The scenery on the trail is therefore usually quite uninteresting, but with the recent snowfall, the mountainside was a beautiful glistening white beneath the sun. The trail began as a steep rocky slope with large boulders, and completing the 3,000 vertical foot climb felt like an impossible task. However, as we continued to place one foot in front of the next, our goal slowly drew closer. Whenever I began to feel tired, I would remind myself that my grandparents were climbing the same trail alongside me, and they are both 75 years old (albeit incredibly fit and active 75-year-olds)!

After hours of steep upward hiking, we finally reached the peak. Up to this point, our view of the surrounding mountain range had been blocked by the mountainside on which we were climbing. However, upon reaching the top, we were met with a breathtaking view of snow-covered mountains in every direction. The sky was so clear that we were able to identify Pike’s Peak, over 100 miles away! Though the climb was slow and arduous, it was undoubtedly worth the beautiful views and sense of achievement we received. I can’t wait to climb my next fourteener!

I am constantly inspired that my grandparents are able to lead such interesting and active lives. It is a blessing to have them in my life and to be able to share in their love of nature and the outdoors! 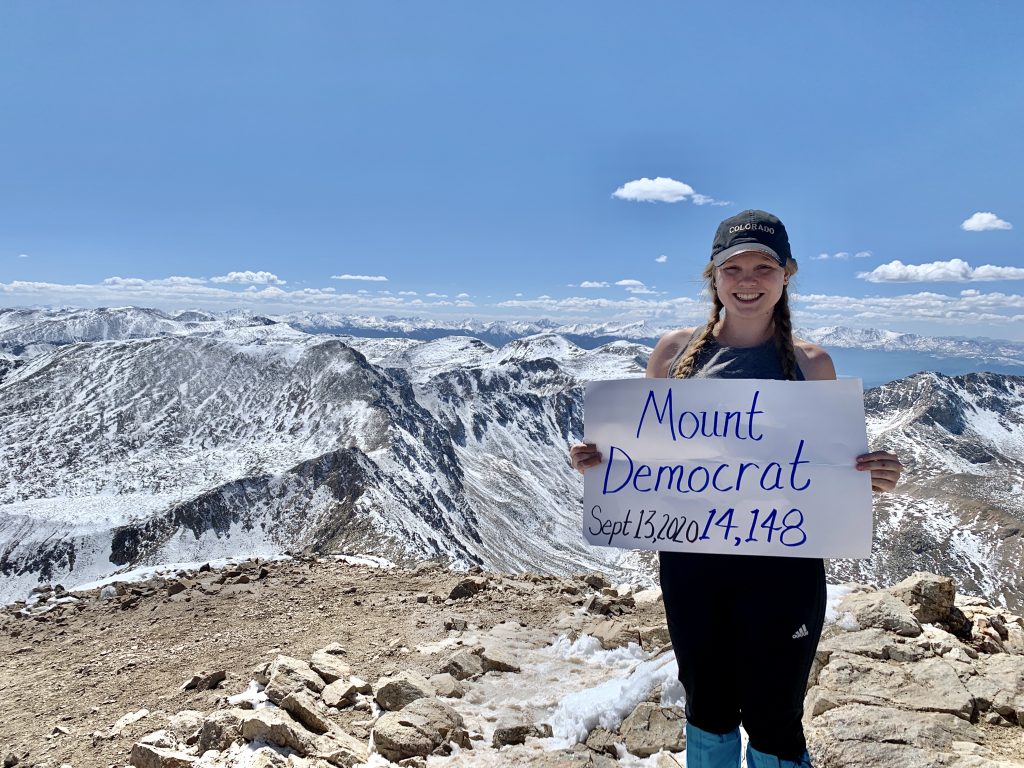