Sam – Off To Spain 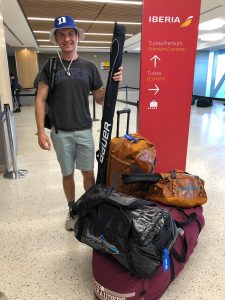 At my high school graduation, my philosophy teacher Mr. Concilio gave a piece of life advice that has really stuck with me through my first week in Spain. The simple version of the advice that he gave is that when you have two different life choices, make the decision that allows you to tell the better story later in life. I think about this advice because this August I had the choice of either matriculating at the university that’s been my dream since I first set foot on campus, or I could live in Spain for seven months. I chose the latter, otherwise I wouldn’t be writing this blog post. Every day I think about if I had chosen to begin my freshman year at Duke and how much easier it would have been logistically. I wouldn’t have to open a Spanish bank account, change my phone plan to a Spanish one, or fight for an appointment with the police to get my application for residence officially approved.

Of course, if I had chosen to begin my freshman year, then I wouldn’t have gotten to see a castle built on top of a boulder (a scene of Game of Thrones was filmed there!). I also probably would never have known about the region that it’s located in, Alto Tajo, which combines the classic plains of Southern France and Spain with the wind beaten rocks of Arizona. Nor would I have gotten to know my incredible host family, and had the privilege of meeting their incredible friends, who so far include a talented Spanish chef, and a man who raises most of the bulls that are fought in Spain. I also, most obviously, wouldn’t have the incredible opportunity to become fluent in Spanish, which would let me talk to 450 million more people than I already can in English.

Day to day I am having an incredible time. But the fact that I am going to be in Spain for the next seven months constantly looms over me; it’s scary. Whenever I start having doubts and thinking that I just want to go home I try to remember what Mr. Concilio said. Next summer, when I am getting ready to start my freshman year at Duke, I am going to be so happy that I took a gap year. I will have incredible stories to tell and I am going to be much more prepared for life as a college student. After all, if I can live a year in Madrid, Durham should be a piece of cake!