The sun was scorching, the orange coveralls and red helmet feeling like a lobster shell in which I was being cooked alive. Summitting a small hill, cows scattered in every direction. In front of a small cave, we took a break for our guide, Joe, to brief us. Joe, ever the laid-back Kiwi, summed up his safety briefing with, “So basically don’t do anything stupid. Kapai?” “Kapai,” we answered in unison. With a wry smile, Joe quipped “If the other group is entering through the entrance called Monsters Mouth and coming out of this entrance, where are we entering?” The joke subdued some of the anxiety, but I could tell it was still palpable. After all, I was with a group of teenagers half a world away from their families. In addition to having been out of contact with our families for the past six weeks, we were about to spend the next three hours immersed in the miasma of unknowns better known as a cave. 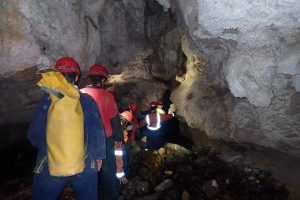 Meandering down a stream, hopping over boulders, we entered the darkness. I felt like I was being swallowed by an anaconda; humid, dark, and temperate with fang-like stalactites and stalagmites. Splash, I slipped into the stream and my shoes were wet. Huff huff huff, Liz started breathing hard; the tunnel had narrowed to slightly smaller than an average household hallway. Joe handed Lucas and me a map and said, “Can you make sure we get to Recording Room?” as he moved back in the procession to comfort Liz.

I flicked the button on my Felix headlamp and bathed the cave passage with a thousand lumens. I could see about fifteen meters in front of us and it was just enough to keep the claustrophobia at bay. Down and down we went with each step we got further and further from the surface. We were approaching a kilometer into the tunnels, and I was acutely aware of our distance from help, not only underground, but in the middle of a farm field in rural New Zealand, help would be hours away. I placed my hiking boot gingerly on the rock in front of me testing to see if I could walk on it. With a recently repaired ACL, I knew that a slip could be catastrophic and that it would take hours to be stretchered to a doctor.

Remarkably, Lucas and I navigated the group to Recording Room without getting lost. The corridor prior to the cavern had been tight and our group of eight let out a collective breath when we sat down in the much more spacious Recording Room. Joe explained that the room got its name for its remarkable silence, and he instructed us to turn our lights off. In the darkness, he guided us through the most tranquil and meta meditation I have ever experienced. After our eyes adjusted to the darkness, Joe pointed out the glow worms on the ceiling. I looked up to see the night sky, thousands of glow worms emitting a hypnotizing slightly green glow. I felt ultra sensory deprived, silence, not feeling, just the pulsing-glowing green stars on the ceiling. 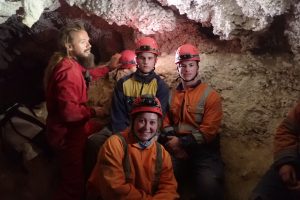 We traversed another passage and arrived in Glow Worm Grotto where I was again entranced by the glow worms. The experience was visceral and primal in a cave surrounded by darkness relying on my tribe of group members to succeed. Coming to a small subterranean waterfall, we rigged climbing gear to rappel down to the pool below. Joe sent me first and tossed me the remainder of the climbing gear and dry sacks. Daydreaming as I waited for the rest of the group, I couldn’t help but smile, I was in love with all of it; spelunking, New Zealand, the Kiwi attitude, all of it.

We moseyed on at a careful pace to arrive at The Great Hall. In The Great Hall, the other group was waiting in ambush with their lights off, we were thoroughly spooked. As we took a snack break, we excitedly traded stories with the other half of our student group. I heard that the upcoming Possums Passage might be challenging. 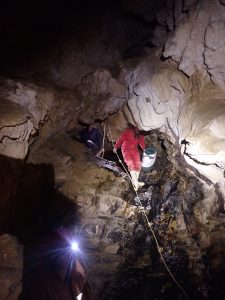 We marched on at a steady pace with Joe letting us navigate our next destination was The Balcony Room. We made it to The Balcony Room with little trouble and Lucas and I were quick to proclaim ourselves competent navigators. Shortly after such a proclamation, we couldn’t seem to find the exit to The Balcony Room, and Joe insisted that we had to find it without his help. After ten hopeless minutes, Joe made eye contact and gave a slight nod upwards. How could have we been so oblivious? In the ceiling was the room’s namesake, a balcony. The balcony was close to ten feet off the floor and was in the middle of the room, there wasn’t a wall to scale or a conveniently placed anchor to attach a climbing rope to. The group came to the consensus that a human ladder was the only possibility. Joe, Rachel, and I formed a human ladder, and the rest of the group climbed up us onto the balcony. I went next grabbing the down reaching hands and for a second I thought they would drop me. I turned around to help Rachel up, but Joe shook his head and said, “Not safe brov.” They just walked away from the balcony and three minutes later they were by our side, Joe cheekily exclaimed, “secret passage”.

Slightly irritated by the secret passage that we couldn’t find, we headed for Possums Passage. Possums Passage turned out to be a hole in the wall about a meter wide at the entrance. Flashing my torch into it I could tell that it grew more narrow as it went. “This is what we in the biz call a wormhole,” said Joe.  The group returned his nonchalance with apprehension. Knowing that the claustrophobia would discourage some from taking the tunnel, I dove in first and army-crawled the thirty or so meters to the other side. Half of the group chose to circumvent the tight passage, but for me, it was turned out to be the highlight of the day. The adrenaline rush was why I had come to Aotearoa. 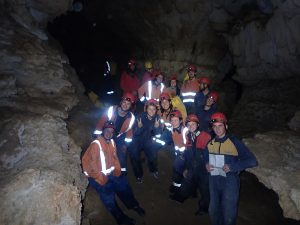 We clambered on and reached Monster’s Mouth exiting into the strong New Zealand sunlight. I am not one for melodrama and poetic cliches, but the cave really did change me. The change wasn’t drastic and it didn’t mark a turning point in my life, but it was my first experience with that particular manifestation of nature and it bestowed some profundities. In the cave, I felt at the complete mercy of nature, a preview that refined my fatalistic outlook and prepped me for evacuating New Zealand in the midst of a pandemic. Little did I know that in a week’s time I would be huddled in the corner of the Auckland Airport with a mask and sunglasses covering my face. The cave made it all seem like if it was my time, then it was my time and helped to soften the realization that the remainder of my gap year travel was canceled.