After coming back from a summer of travel and adventure, it was time for me to settle into my first internship. Over the course of August and September I spent my time working as a process manufacturing engineering intern for a UK start-up company named Oceanium. Oceanium is a company who are ‘utilising innovative refinery technology, based on decades of marine science experience… to produce high-demand products, including high purity bioactives for nutrition and cosmeceuticals, plant-based food ingredients, and innovative materials.’ 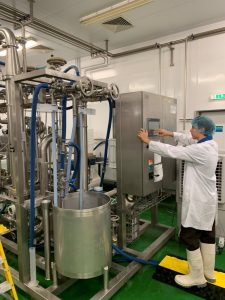 Along with my colleagues, it was our job to design a production system which could process enough seaweed to create product at a profitable rate for commercial sale. Due to previous lab testing, we knew the process was theoretically possible, however we had no idea if it would be feasible on the large scale. We were set the final goal to be able to process over 3000 litres of seaweed per day which was an enormous jump from the previous 1200 litres we were processing, but we had faith in ourselves and our equipment (maybe a little too much faith as we found out later) and started redesigning the factory system.

We found out very quickly that we had slightly overestimated our capabilities though as within two days of increased production, the decanter – think of it as a large tube with a corkscrew type of piece in the middle which is used to squeeze all the water out of the seaweed – broke. Now, typically a machine breaking isn’t that big of a problem, and that’s what we expected this time. So, we called up the company who made the machine (expecting an easy fix) and asked what we should do. Unfortunately, there was one small problem: they only spoke German. Eventually, we resorted to using a hammer to hit the parts back in place, which miraculously fixed it! Until, 45 minutes later, it broke again. However, luck was in our favour this time as it was coming to the end of our pre-planned production window and therefore the broken machine was no longer our problem as it was to be sent back to the manufacturer to be fixed.

Along with the work, it was also my first time living independently in a new city, and I very quickly found out why take away food is so popular. My co-workers also helped immerse me in northern England’s culture of going to the pub literally all the time.

Despite some of these challenges, I absolutely loved my time there. It was a fantastic first dive into the world of engineering work, I met a lot of really interesting people and made some great friends. Each time something went wrong, it just gave me another opportunity to work on my problem solving!

I have also kept intensively training Brazilian Jiu Jitsu in preparation of my biggest competition yet this December. While I am very excited, I am also super nervous and will make sure to keep my blogs updated with my progress!