When I think of December I think of The Nutcracker. It has become a staple of my December since I danced in my first Nutcracker (I was the mouse that got shot in the battle scene). I think like many dancers there is a love-hate relationship with The Nutcracker. The holiday tradition often seems inescapable as the music of Tchaikovsky’s famed score fills studios in October as rehearsals start and is heard through the new year as the twinkling notes of the sugar plum fairy’s solo echo behind a car commercial or the upbeat rhythm of the candy cane divertissement fills a department store. 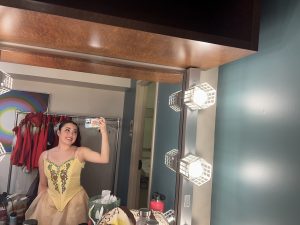 This year was no different as rolled Mid-October we had started rehearsal. I had the opportunity to dance in the Waltz of the Flowers. This was the first Nutcracker I performed with a company other than the company I started dancing at and danced with until I graduated. When you dance at the same studio for such a long time you work your way through the cast of Nutcracker as you start by performing as one of Mother Ginger’s gingersnaps and eventually performing as the sugarplum fairy or Clara. 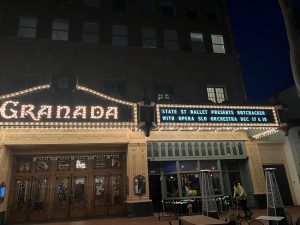 Even with all of those Nutcrackers, I had never performed in Waltz of the Flowers before but this year the excitement I usually felt about The Nutcracker was subdued. I think this was because despite Nutcracker being the cornerstone of my Decembers this was a new Nutcracker. The choreography was different, the people I was performing with were different, and the theater was different. It was all new and it wasn’t the Nutcracker I had grown up with and had associated with all of these happy memories. Something that I used to get so excited about felt more like a hurdle that was standing in front of me than something I used to wait with anticipation for all year.

I carried this attitude with me until that first performance. I think I forgot about the pure joy that comes along with the performance. As I ran off stage I felt that child-like joy I had always associated with Nutcracker. I forgot about the discomfort of the new and different and remembered why I loved Nutcracker: because it was fun. As I sat backstage watching the Grand Pas de Deux I was overrun with the nostalgia of watching the Grand Pas rehearsal through the doorway of my home studio when I was little, in awe of the grace and beauty. And as I sat backstage this year I felt the same way and remembered how magical dancing and performing is and how lucky I am to do it every day.

← Listening to My Gut Barcelona Part I: The Dream →
Duke University