I spent most of the past month on a trip through Argentina’s Patagonia region organized through my exchange program. Along with 52 other exchange students, I spent 17 days traveling along the famous “Ruta 40”.

The trip started with all of the exchange students from northwest Argentina meeting at the Córdoba bus station. We had previously met each other at an orientation camp in September, and all of us were excited to see each other again. We then got on the bus and spent the first of many nights sleeping on the road. 20 hours later we arrived in Puerto Madryn where we spent two days whale watching, exploring the beach town, and playing cards at night, sharing stories from our exchange year so far. 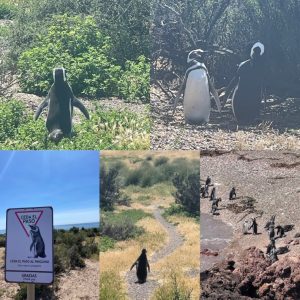 From Puerto Madryn we went to El Calafate, making a stop along the way at Punta Tombo to see the world’s largest reserve in the world for Magellanic penguins.

After an hour of watching these adorable 2 ft tall penguins waddle around, we resumed our trip toward El Calafate and spent the night on the bus. In El Calafate, we got the chance to visit “Parque Nacional Glaciares”. We spent hours taking in the massive—yet ever-shrinking—size of the approximately 18 thousand-year-old glaciers. While we were viewing the glacier, we heard a huge boom and watched as the glacier calved and a massive piece of ice fell into the water. We then got on a boat to get a closer look at the glacier. 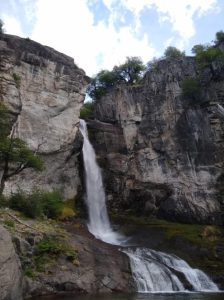 The next day, we spent some time in the town of El Chaltén visiting a waterfall and hiking a small mountain.

At 2 am, we continued our journey south toward Ushuaia. The Islands of Tierra del Fuego–where Ushuaia is located–are shared by Argentina and Chile, so that meant 4 border stops along the way, which moved particularly slow because the border agents were a little distracted watching the world cup games that were on. There were even a few students who had to go through the window twice because the agent forgot to stamp their passports the first time. Eventually, we made it to Ushuaia at 9 o’clock that night. Only 1,000 km from Antarctica, Ushuaia, the southernmost city in the world, started as a prison where Argentina sent their “most dangerous criminals”. The town now boasts 75,000 residents and is one of the “gateways to Antarctica” as many ships port here before their journey to Antarctica. I spent Thanksgiving day swimming in the freezing ocean and was thankful for a warm meal afterward. We also visited the national park of Tierra del Fuego before turning around and starting the journey back north. 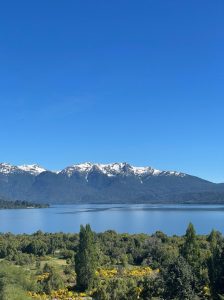 From Ushuaia we drove all night to Esquel where we made a one-night stop on our way to Bariloche. In Esquel, we visited Los Alerces National Park where we saw 3,000-year-old cave pictographs and the beautiful Lake Futalaufquen.

Then, our last stop. Bariloche is a glacial lake town famous for its Swiss influence and chocolate. We spent most of our time here exploring the waterfront and taking in the incredible views. 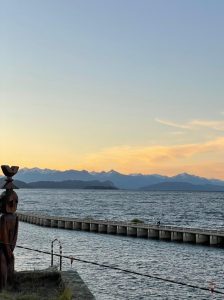 On our last day in Bariloche, we visited a camp with horseback riding, relay races, and an Asado lunch. We had a lot of fun competing against one another and sharing one of our last meals together. After we returned to the city, we visited a chocolate shop and watched a demonstration of how they make Bariloche’s famous “Rama” chocolate. We then explored the small shops before having one final dinner at the hotel. The next morning we got on the bus and spent 22 hours driving back to Córdoba.

I have wanted to go to Patagonia for years, so this trip was a dream come true. We took in some of the most beautiful scenery I’ve ever seen and I was able to make friends around the world. Although there was some tension when the World Cup games were on, all of the students became very close and we are looking forward to the next time we will see each other again.

Speaking of the World Cup, the energy is unreal here as we wait for Argentina to play in the World Cup final on Sunday against France. The USA got knocked out in the round of 16, but ever since I have been cheering on Argentina, and Sunday they have a chance to win it all. My ultra-superstitious host mom will make sure everything is the same for the final as the other games; same room, everyone sitting in the same spots, all of it. Then we will sit in agony for the next 90 minutes, with the hope of Argentina, and Messi, bringing home the country’s third World Cup.