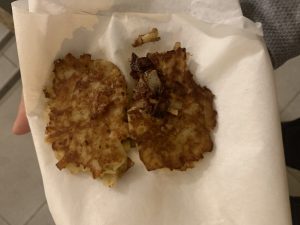 As far back as I can remember, I have celebrated the eight nights of Hanukkah with my family in the US. I would always spend the first night with my extended family, and the other seven nights with my immediate family. But this year was different. Just like during Thanksgiving, I missed spending the holiday with my family. I decided that by eating latkes, or potato pancakes, which is a traditional Hanukkah food, I could feel more at home. I went to an outdoor market with one of my friends, but unfortunately, they didn’t sell latkes. In Israel, latkes are not traditionally sold pre-made, as families usually make them themselves, so my friend and I decided to make them ourselves. We bought oil, potatoes, onions, butter, matzo meal, and eggs. It took a long time to chop everything up and combine all the ingredients (almost four hours), but then came the fun part. 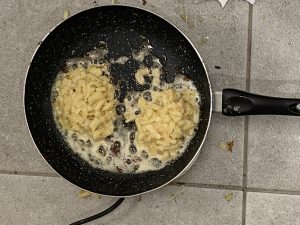 The only outlets with enough space for pans and hot plates were in the hallway of my dorm building, so we created a makeshift kitchen in the hallway. We put the potato batter in a pan on top of a hot plate and began cooking the latkes. Naturally, the delicious smell of latkes brought people out of their rooms. Luckily, we had bought more ingredients than we needed. My friend and I decided to make latkes for almost everyone on our floor.

Towards the end of December, I flew home to the US both to see my parents and brother, and to attend a family reunion in Florida. Upon arriving home, I was immediately struck by the many differences between Israel and the United States. Compared to Israel, there are many more grocery stores but fewer outdoor markets. Also, the buildings are much newer in the US than in parts of Israel, but Jerusalem’s buildings have a more historic and charming feel. Unfortunately, the United States was declared a “red country” by Israel after I left. This means that people in the US who are not citizens of Israel cannot enter Israel because of Omicron. However, several people have been able to return to Israel without citizenship because they left Israel before they knew the United States would become a red country and they had student visas. I am in the same situation, so hopefully, I will be able to return to Israel soon.