A bit of overdue reflection, as it pertains to my Spotify wrapped: It’s difficult to organize my thoughts on everything that’s happened over the past 12 months, so I thought I’d let my music do the talking.

Every December, Spotify releases a summary of each user’s music from that given year. This year, as usual, I pressed play on “Ally’s top songs 2021.” Immediately I was transported back to January, and I mentally travelled through the following months as the songs changed-allowing some overdue reflection on each phase of 2021. Music has a way of doing that. 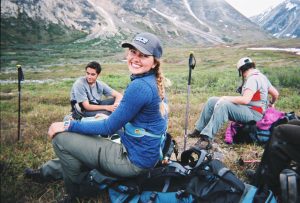 A quick break while hiking to our next camping spot in Alaska. So much happiness is embodied in this photo.

The first song on that playlist? Colder Weather by Zac Brown Band. A staple that’s been my #1 song for the past 3 years. The audio equivalent of the childhood stuffed animal you slept with for longer than you’d like to admit. It’s comforting in an inexplicable way.

Thus, we begin with the first set of songs this year: LaLa Land’s “Mia & Sebastian’s Theme,” from when I decided to pick up piano again in January 2021. A collection of Morgan Wallen ballads my best friend and I played almost exclusively during our 5-hour-long AP Physics study sessions. “Hotel Room Service” by Pitbull and “One Time” by 13-year-old Justin Bieber: tokens from the “Hype Up playlist” I created for spring soccer season.

Next, Spotify included an assortment of what I call “graduation” songs. There’s Mac Miller. Kanye West. Harry Styles. And a lot of Queen. These are the sort of songs you hear blasting from the car next to you at red lights. They match the abundance of energy we had during our final months of high school. Listening to these songs reminds me of the season of graduation parties, spring break, final exams, and graduation ceremony I had been looking forward to all 4 years of high school.

With the following indie, slow, acoustic songs, Spotify reminded me of the first adventure of my gap year: my Alaska backpacking trip. There were a few weeks afterward when I cried every time I heard the song “Nelly” by Dr. Dog. Alaska was the first time I met people I truly identified with, and it was there that I fell in love with backpacking and outdoor adventures. I think leaving Alaska was my first heartbreak. 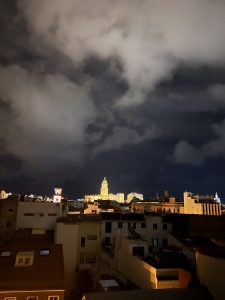 Next on my playlist is a sequence of exclusively 70’s music, including several masterpieces from Daryl Hall & John Oates, Fleetwood Mac’s “Gypsy,” and a lot of Billy Joel. This period of time, between Alaska and Spain, is a bit blurry to me. These songs provoke an odd feeling of loneliness, but not in a negative way. They’re comforting—the transition from summer to fall was a time when my friends had already left for college, and it felt like I was just waiting for my turn to leave. For the first time, I became comfortable being alone—a skill that would serve me well the rest of my gap year.

Finally, Spotify finished my yearly playlist with “Californication” by the Red-Hot Chili Peppers, Frank Ocean, and “Bailando” by Enrique Iglesias—songs from my first 3 months in Spain. This music takes me back to laying on the beach with Europeans I barely knew, not knowing that they would soon become some of my closest friends. 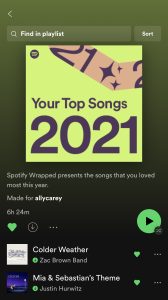 It reminds me of exploring Málaga for the first time, tip-toeing around my host family’s house, and learning how to navigate in a foreign language. It elicits the nervous excitement of moving to a new country alone.

Spotify wrapped is nothing new, but the songs felt different this year—they held more meaning and provoked more emotion. It’s comforting to know my memories are neatly preserved within each melody. “Ally’s top songs 2021” is a truly special playlist for a truly special year.