The month of November 2021 has been one of the quickest of my life. Now that I’m finally in a routine here, I was able to visit two new cities: Lisbon and London. Each was a unique experience, so I wrote a journal entry after each trip to remember the details.

On November 5th, my 6-person European friend group took €30 RyanAir flights to Lisbon, Portugal. After our 4am flight there, we wandered the cobblestone streets of Alfama— the oldest district of Lisbon— and ate crappy breakfast at the only Portuguese restaurant open at 6am. We rode the touristy tram and explored unbelievable Catholic cathedrals before walking to the €12 hostel we had booked. We approached what appeared to be an apartment complex, and to the right of the door were several doorbells— the fourth had “hostel” written in sharpie. It didn’t seem too promising, but we pressed the bell and were buzzed into the building. On floor 4 we found our home for the next two nights: “Lisbon Angels Hostel.” Three 5’2” Nepali men opened the door and greeted us— the inside was strung with lights, orange flowers, and a conglomeration of paper decorations. The scent of spices wafted from the kitchen, and the in the living room sat several mini-Ganesh statues atop a shelf of books in an unrecognizable language. Colorful quilts were draped over the well-worn couch, and blinking string lights bordered the ceiling. Some sort of Himalayan music played softly from a speaker in the corner. We were shown our room— complete with 3 bunk beds and 2 square feet of floor space. It was perfect. While the others were napping, a friend and I sat in the living room and chatted with the hostel owner, Sudya, for the afternoon. He told us that they were celebrating the Hindu holiday Tihar, which is analogous to Diwali but with certain cultural differences specific to Nepal. Sudya told us about his life in Nepal before moving to Portugal, and he invited us to eat dinner with him and the other Nepali men staying in the hostel. We ate a cucumber-potato-spice salad called kakra ko achar and a rice bread called sel roti. It was incredible. The next day we explored the touristy main roads of Lisbon, but we returned in the evening to chat with the hostel men once again. Although I didn’t expect to learn so much about Nepali culture on a trip to Portugal, it was a fascinating experience and a weekend I’ll remember for a long time. 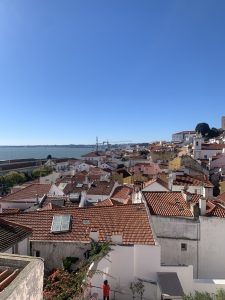 The Alfama district of Lisbon! Many of the buildings here date back to before the year 1150, and the name comes from the Arabic word “al-hamma”, which means baths/fountains. Lining the narrow streets are many traditional shops and cafes, and you can see lots of Arabic influence in the architecture. 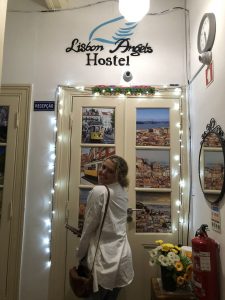 The front door of the aforementioned “Lisbon Angels Hostel.” A fascinating place that I will never forget. And the beds were amazingly comfortable.

On November 26th, I boarded my second ever RyanAir flight, but this time it was to London to visit Hope, a friend I met during my NOLS backpacking course this summer. I stayed in her apartment, and she showed me around Chelsea: the district where she lives. The 30° cloudy weather was an abrupt switch from the never-ending 65° and sunny of Málaga, but as odd as it sounds, it was a nice change. We did some touristy activities, including the London eye, Westminster Abbey, and the historic supermarket “Harrod’s.” We reminisced on our time in Alaska and laughed about how weird it is to see each other showered and in normal society. We ate good food, drank overpriced coffee, and eavesdropped on conversations simply to enjoy the British accents. It’s strange to think about the stage of life I’m in versus where I thought I’d be. If I was to tell my 16-year-old self that I spent a weekend in London with a friend I made while backpacking in Alaska, I don’t think she would’ve believed me. 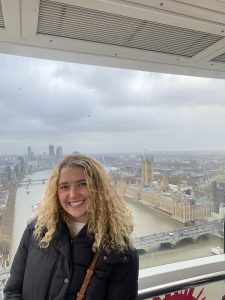 A classic tourist photo inside of the London Eye. Behind me you can see the Parliament building and the river Thames. 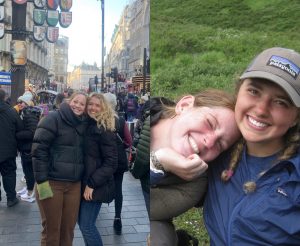 Hope and I in London (left) vs in Alaska (right).