A Week in Poland

By Karina Casarrubias in Uncategorized on December 29, 2021.

My second month abroad was even more meaningful than my first. Not only did I learn more about Israel and Judaism in the classroom, but I also continued to explore the Old City by foot. In my first blog, I wrote about seeing the Dome of the Rock (or Temple Mount) from afar. Recently, I also had the opportunity to explore it up close during the one hour of the day that my program was permitted. 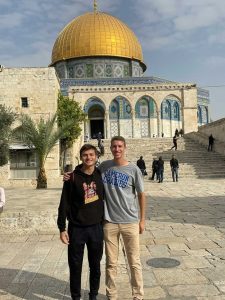 I spent the last week of November in Poland. It was cold and gray, and the towns we visited were bleak. However, I enjoyed the food, which helped make up for the fact that it was my first Thanksgiving away from my family. I missed all of the traditional foods we eat each year, especially my grandma’s pecan pie. I also missed watching football with my dad and brother.

In Poland, I visited many of the concentration camps from the Holocaust, including Auschwitz-Birkenau and Treblinka. I also saw the Warsaw Ghetto.

Although I had previously studied and knew the historical significance of these sites, I was overwhelmed when I saw them in person. The population per square kilometer in Manhattan is almost 28,000. In the Warsaw Ghetto where Jews were forced to live, there were 125,000 Jews per square kilometer. They comprised nearly 30% of Warsaw’s population but occupied only 2.4% of its area. 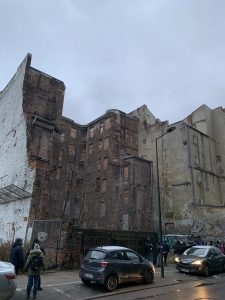 Leaving Poland, I was consumed by one thought: how truly lucky and privileged I am to be alive and to have been born in the United States.

During the last few days in Poland, I learned about the Omicron variant to Covid. I also learned that if we didn’t make it back to Israel by midnight on November 28 we would be required to quarantine for three more days. Having already quarantined for a full week in September, I was really hopeful that my plane would be on time. As luck would have it, our wheels touched down 126 minutes after the deadline so we were immediately tested and hurried to our quarantine locations. I am looking forward to my final month in Jerusalem once quarantine ends.

← The World at Home Thank you, RyanAir →
Duke University