Training to be an EMT was one of the most fulfilling things I’ve ever done.

It was also one of the hardest. 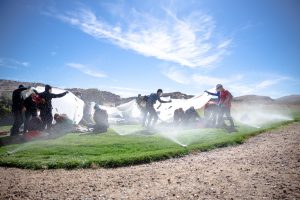 For six weeks, my classmates and I spent our Mondays, Wednesdays, and Saturdays together, motivating each other through ten-hour lecture days and seemingly endless back boarding sessions. We made it through 36 hours of ambulance ride-along, a day-long event lovingly referred to as the “EMT Olympics,” and a simulated nine-patient Mass Casualty Incident.

We did all that, yet when all was said and done I felt nowhere near ready to work on an ambulance and take the lives of others into my own hands. Although I passed the national EMT exam (the NREMT) and volunteered with ambulance companies in the Bay Area, the terror and uncertainty I felt when treating patients prevented me from actually signing contracts with any of them.

Instead, I enrolled in NOLS’ Wilderness EMT semester program.

Although I told family members I was going for the wilderness aspect of the program — which, don’t get me wrong, is incredible — I signed up because I didn’t feel confident in my ability to care for others, and thought that relearning the material would help.

A month later, I packed everything I had into two duffel bags and headed off to Wyoming.

Again, I met peers who motivated me to be my best. Again I practiced skills for hours on end, spent nights sorting through simulated Mass Casualty Incidents, and made it through “The Room of Doom.”

I did all that, and yet at the end of the third week felt no more confident than the day I graduated from my last program.

Yes, I was a better EMT than before, but that didn’t translate into increased confidence at the thought of actually treating patients.

At first, I was disappointed. How can I do all of this, I thought, and still fell unprepared? 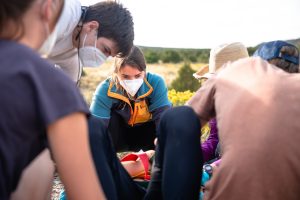 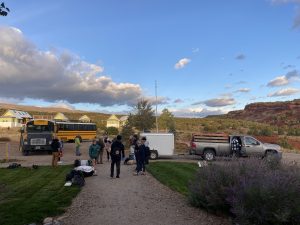 Photo taken on October 7th at the Wyss Medical Campus

However, as I kept on thinking about my trepidation, I came to a realization — up to this point in my life, I haven’t really put myself in positions where I feel unconfident. I practice speeches until I can’t get them wrong, switch hobbies when I hit plateaus, and rip the “bad” drawings out of my sketchbook before I show it to people. It was a crutch I could get away with when I was younger, but now it actively prevents me from doing the things I love to do.

Confidence, after all, doesn’t come without experience. And experience, at its core, is making bad decisions, messing up, and learning how to do better next time. In order to pursue the things I love doing (EMT work included), I need to be comfortable being uncomfortable. I need to be okay starting where I am, and improving from there.

I’m writing this on a bus to Utah, an hour away from putting on a 50-pound backpack and embarking on a month-long technical canyoneering expedition. It’s something I’ve never done before, which seems as good a place as any to practice what I’ve just preached.

So here I am, starting.