As I hoped going into my gap year, I have already started to learn things I never expected. I did my laundry in a communal laundry machine, bought groceries at a nearby supermarket, and traveled on planes, trains, and busses. Each of these things was further complicated due to the need to navigate a foreign language and another country’s COVID-19 protocols. I also spent a week quarantined with three new friends in a room the size of a large closet.

When I signed up for Year Course, I was not expecting the cultural differences to be such a key factor. I am staying in Jerusalem on the Kiryat Moriah campus, which not only houses Americans, but also Canadians, Guatemalans, Germans, and Israelis.

The cultural differences exist outside of my campus as well. As expected, I am learning more about Jewish heritage and Israeli history in courses and tours. One of my most interesting courses, “The Politics Behind the Conflict,” addresses more than just Judaism. In our first meeting together, we went on a day-long tour of the four quarters of the Old City: Jewish, Christian, Armenian, and Muslim. We saw areas of the Old City in this class that many tourists never take the time to see. 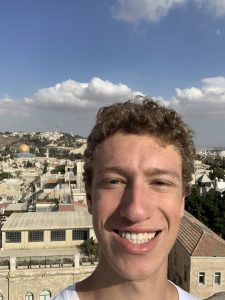 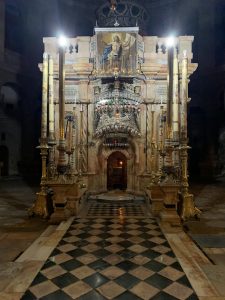 (Inside the Church of the Holy Sepulchre)

Although there are restrictions on who can go inside the Dome of the Rock, we were able to walk around outside of it and learn about its significance. I also walked through the Shuk (an outdoor market) in the Muslim Quarter, where we learned what it is like to live in the Old City. Surprisingly, despite different beliefs and cultures, the Old City is a very peaceful place, and the people usually get along. 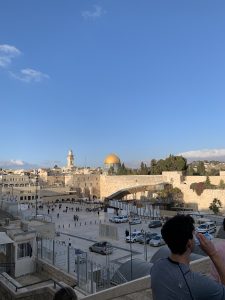 I walked through the narrow streets of the Armenian Quarter while I learned about the Armenians’ relationship with the Jews.

I also visited the Western Wall, which is the holiest place in Judaism because it once surrounded the First Temple.

In the Christian Quarter, I went inside the Church of the Holy Sepulchre. Although there was not a line to enter and the church was mostly empty, it was impossible not to appreciate the significance of the location.

My gap year in Israel has exceeded expectations so far, and I cannot wait to blog more about my time here in the coming months.