Every year around springtime Jews worldwide, and especially in Israel, celebrate three days: Yom Hashoah (Holocaust Remembrance Day), Yom Hazikaron (Remembrance Day for Fallen Soldiers and Casualties of Terrorist Attacks), and Yom Ha’azmaout (Independence Day).
Yom Hashoah is a really powerful day at home as well as here in Israel. At home, my school would bring in a Holocaust survivor or a survivor’s family member to tell us his or her story, and we would stand for a minute-long siren played on the school loudspeaker. Here, one of my friends’ grandfathers told his story, and we stood for the siren that was blasted over the country-wide loudspeaker. In Israel, everything stops during the siren: all meetings, TVbroadcasts, vehicles on the streets and highways stop and everyone stands.
Six days later was Yom Hazikaron. I didn’t have the highest of expectations because, at home, the ceremonies we had at school were always contrived and lacking immediacy. It began with an 8:00 pm country-wide siren — in the Jewish calendar days start and end at nightfall not at midnight — followed by a ceremony. We sat in a circle on the floor, and anyone who knew of a fallen soldier or a casualty of a terrorist attack told their story and a song was sung and a candle lit in their honor. We sat there for 4 hours because around 25 out of 70 had stories to tell about family friends, neighbors, cousins, cousins’ friends…The stories made me sad, the songs made me weep, and the number of stories made me feel guilty. As a Jew, Israel belongs to me just as much as it does to any native-born Israeli. But can I just sit happily in America and come to Israel whenever I want while Israelis die left and right? What kind of a Zionist am I, choosing to go to Duke over serving in the IDF (Israeli DefenseForces)? 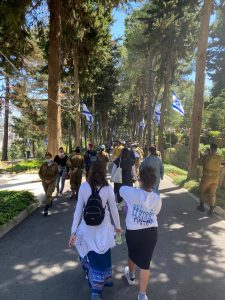 The next day I woke up early and took the bus to Har Herzl (Israeli National Cemetery) with some friends for the 11:00 am nationwide siren. Families of fallen soldiers, current soldiers, and people like me who wanted to pay their respects properly were huddled around all the graves. You can’t get more immediate than standing at the foot of a grave of a fallen soldier.
That evening, I attended a tekes ma’avar (transitional ceremony) marking the end of YomHazikaron and the start of Yom Haatzmaut. It began with some slow songs and then we raised the Israeli flag, symbolizing the rising of spirits. I performed in a dance with a boy from the neighborhood whom I mentor. Then I attended a Hallel service, a prayer of praise sung on specific celebratory days. Later that night my friends and I went to center city. Usually, there are a bunch of free concerts in the middle of Jerusalem that you can go to, but because of Corona you had to reserve tickets; while we didn’t score tickets to the hottest concerts, we went to a cover band concert of Israeli classics. I was happily surprised that I knew most of the songs and had a great time singing and dancing. We spent the rest of the night enjoying the festive atmosphere of the city (think Time Square NYE). I got a couple hours of sleep and then went to two friends’ family BBQs. The meat was incredible and let’s just say my stomach was both satisfied and furious at me.
Yom Haatzmaut was a thrilling 24 hours, but, in general, I don’t think it quite reached its potential – a sentiment a lot of my Israeli friends agreed with. The day had a joyous celebratory atmosphere of eating, singing, drinking, and dancing with family and friends, but I think the presumed pride got lost in the desire to enjoy the celebrations.
These three days galvanized my inner Zionism, and I have a lot of thinking to do about how these feelings fit in with the rest of my life and values. I wish I could elaborate more on this last sentence, but I’m not yet at that stage. I can tell you, however, that I am ecstatic about attending Duke in the meantime and learning about the many facets, wonders, and challenges of America.