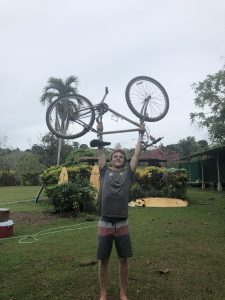 How do you get around without a car when nothing is nearby? That is a problem I had to face with four of my friends in a small town in the southwest corner of Costa Rica. The only guaranteed ride was to and from work, and buses definitely did not come on the hour and half hour like in my hometown. So typically, we walked. If you were lucky you could hop in a friendly (looking) passing car with a raised thumb and your best smile, but those came few and far between. We would take afternoon trips to the store or full day trips to town if we had aspirations of purchasing rare and exotic items such as cheese (which was a key ingredient in my rice bean and cheese dish served twice per day on average). This wasn’t really a problem until one day our boss took us on a drive up the coast and pointed out all these super cool places we could explore and a truckload of new things to do. Now I’m super active and absolutely not afraid of a good walk or long jog, but it quickly became obvious there was no way I was going to be able to come close to fully taking advantage of this beautiful place.
Pilon is a Costa Rican fishing village with a population of 175 people, with not a single paved road in any of the surrounding towns. I am currently about half way through my stay, working with new friends  to orchestrate a move of an acquaintance’s property, using shipping containers as short term storage while also doing renovations on two different properties in town. In our free time we would explore the jungle covered mountains and beautiful coast in the surrounding areas, surfing on one of the best surf breaks in the world and finally playing stick rock and rock bocce, some of the more barbaric games ever invented on random beaches between towns.  The last thing that made it out of the old house but not quite into the shipping containers were two rusted bikes with flat tires that we took back to our home. These bikes would be dismissed as useless hunks of metal in almost any normal garage, but to me they were beautiful stallions that had the potential to give me access to boundless adventure, exploration, and more cheese. 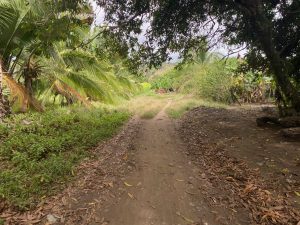 We spent the day after our road trip fixing up the ancient bikes and before long, I was off.  I have been biking and exploring something new about this incredible country almost every day.  We’ve been cliff jumping, hiking along rivers, scouting wildlife in the mountains and finding new beach spots.  I have been doing it all and making the most of this beautiful place I am living in because of my access to wheels. The bike has also served as an escape, as it allows me to get out of the “house” ( one bedroom, one bath, with outdoor seating and kitchen) which gets pretty crowded and overwhelming with four other boys.  The rides themselves were fun in their own right, but they offered a chance to think and reflect on life while taking focus off sweating buckets on a dirt road to anywhere. I have learned much about myself through journey to new destinations via my bike.  Thinking about where I am and where I’m going is utterly fascinating given the crazy year we’ve all had.  While the bike initially provided a means to scout move waves and buy more cheese, it ended up giving me time and space to explore my thoughts. 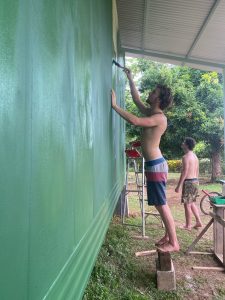 The unusual year off school is quickly coming to a close and I’m starting to realize how uniquely I’ve grown by taking this alternate route to Duke.  I am as excited as I was a year ago, but now I’m a little more informed and the most basic broken down bike has helped facilitate my journey.