I recently read an interesting article by Courtney Martin titled “The Reductive Seduction of Other People’s Problems,” and one of the main messages I was left with is that foreign problems often seem much simpler and more solvable than they really are. After spending over seven months in Israel I can confidently say this couldn’t be more true. Issues surrounding the Israel-Palestine conflict, Jewish society, religious tensions, and much more that I wasn’t even aware of before arriving here have forced me into a personal crisis. I quickly realized after arriving, to my dismay, that the conflicts I came here to better understand would only become more confusing and distressing as time would go by and as I would have more personal close encounters with the people who are most affected.

Last Tuesday at seven in the morning I arrived at the Western Wall in Jerusalem with a group of friends from my program. I wasn’t there for a regular tourist visit, though, nor for anything particularly spiritual. Rather, I came in order to support my friends praying with the Women of the Wall, a multi-denominational organization that strives to achieve the right for women to pray freely at Judaism’s most sacred sight. As of now, women are not legally allowed to read from the Torah or wear prayer shawls at the Wall, and attempts to do so have been met with violence from both the police as well as the ultra-orthodox and orthodox communities. Throughout our two hours there myself and a few other men, who supported the cause by singing prayers from outside the women’s section and by being an extra barrier between the ultra-orthodox counter protestors and the women attempting to pray, were harassed, yelled at, pushed, spat on, and called traitors, and I can only imagine how much worse it was within the women’s section. Ultimately, the confrontation was incredibly disturbing but eye-opening. Having children as young as eight or nine screeching in our ears while religious men in their 70s or 80s cheered them on while calling us Nazis certainly allowed me to experience issues surrounding religious pluralism in an entirely new way. 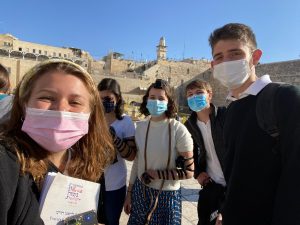 Two of my friends pictured here wore tefillin, a set of small black leather boxes containing scrolls inscribed with verses from the Torah. Observant Jews wear Tefillin during morning prayers, but the Orthodox and Ultra-Orthodox communities strongly oppose the wearing of Tefillin by women.

Although I was infuriated by what I saw, I tried my best when reflecting on that day to understand what happened from different perspectives. Throughout this whole year one topic of interest that I’ve been exploring is moral subjectivity, so I’ve tried my best to not immediately reject different communities’ varying moral codes. With that in mind, I left with the impression that the fundamental moral principles under which the people yelling at us live simply don’t align with those of myself or most of the people I know in my more secular, liberal, and Western world. My worldview largely revolves around individuality and thus I place a lot of importance on civil rights, diversity, and fairness. I’m sure these counter protestors don’t hate the idea of fairness and individual rights, but it seemed to me like their moral foundations are based more in ideas of sanctity, authority, and loyalty. When one of my friends said something along the lines of, “just because we don’t agree on each other’s way of being religious it doesn’t mean we should fight to control each other,” a guard who was meant to protect us yelled at him that he was no Jew but a Nazi. Of course, I recognize that in the heat of a protest it’s hard to do anything other than yell at the other side, but still, how could I create effective dialogue with these people when we, to a large extent, speak from completely different moral planes? 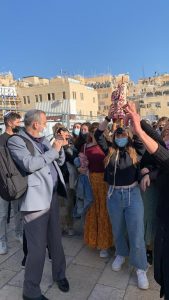 My friend Rebecca carries a Torah that was snuck into the Western Wall Plaza by Gilad Kariv, in the gray suit, who is the first Reform Rabbi to serve in the Knesset.

Maybe it takes more than logic to convince one another. Maybe instead of throwing facts around, I’d need to tell stories and express the importance of different narratives. I’d need to successfully put across as a tangible, relatable thing the foundations of what I believe in, because if we don’t agree on those foundations then what difference does it make if my friend says she feels oppressed by the religious authority or if the ultra-orthodox claim the Torah says only men can wear tefillin.

During my gap year I have found many more new questions than answers and that’s certainly been frustrating at times. But when I signed up to come here, I believed I was ready to challenge myself and to question what I believe in. The frustration that I’ve felt throwing myself into situations like these at the Western Wall has been one of the most challenging parts of my year, but, at the same time, it’s been the most rewarding part as well.