As one of the most turbulent and dangerous areas in the world, the Gaza strip is certainly a place myself and most Jews have learned about, at least in the context of its relationship with Israel. Before writing more about my experience learning about the conflict between Israel and Gaza, though, I thought I’d give a brief summary of how today’s circumstances came to be.

During the War of 1948, in which Israel won its independence, thousands of Palestinian refugees fled the war and settled in the Gaza strip. The territory ended up under Egyptian rule and stayed that way until Israel took control after the 1967 Six Day War. Over time, a number of Israeli settlements were built within the Gaza strip, but growing violent opposition convinced Israeli Prime Minister Ariel Sharon that it was t

oo dangerous to continue the Israeli civilian presence within the territory. In 2005, Israel unilaterally withdrew from Gaza, forcibly removing the Israeli residents from the settlements. After an election and military coup, Hamas, an extremist militant group, took control of the strip. Since then, constant rocket fire targeting Israeli civilians has led to several more violent confrontations between Gaza and Israel, leaving much of Gaza destroyed and in extreme poverty. 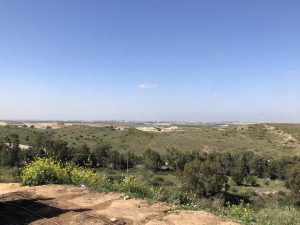 My view of Gaza City from Sderot.

Until recently, my vision of the Gaza strip and its neighboring Israeli towns was largely abstract. Israelis have gotten so used to constant rocket fire from Gaza that it no longer seems unnatural, and because I had never actually met someone from Gaza, their reality to me felt like nothing more than a cautionary tale of what misunderstanding and unending conflict could do to a society. I felt almost numb to the fact that nearly 2 million civilians live in Gaza in some of the worst conditions on the planet and that the poverty and violence that exists there is so closely related to the reality I’ve been living for the past six months in Jerusalem. 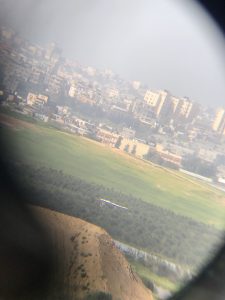 A closer view of Gaza through a telescope. Seeing real people on the other side of the border, and speaking to Ahmad on the phone, made the Gazan’s reality feel more tangible to me.

This past weekend, my program took us on a tour of the towns neighboring the Gaza strip and introduced us to a number of people who’ve experienced the conflict on a more personal level. First we arrived in Sderot, a small city less than a mile from the border with Gaza. We heard from a woman who had lived near the border for over thirty years and also spent many years in Egypt, interacting with Arabs and learning about their struggles. After speaking about the need to work towards peace, she put us on the phone with a man named Ahmad who had spent his entire life in Gaza, unable to leave, and who spoke about the living conditions his community is faced with. As an academic who regularly interacts with Israelis and who’s attempting to lessen the tensions in the area, he is seen as a traitor to Hamas and has been arrested multiple times. Just being able to hear the voice of this man who many people see as an enemy simply because of the place where he involuntarily lives helped me see the urgency with which the conflict needs to be solved. After speaking to Ahmad, we took a tour of Israel’s defensive infrastructure with a Jewish man whose settlement was destroyed by Israel during disengagement. Throughout the tour, he didn’t hide his anger towards the attempted peace process and the Hamas terrorists who launch rockets into Israel every month. I was able to see inside Gaza through a telescope, and in one frame I could see farmers on the other side of the wall, with buildings with Hamas posters on one side of them and heaps of rubble on the other, and directly above the farmers high up in the sky was an Israeli balloon with surveillance cameras attached.

Apart from hearing about Gaza, we also visited a small kibbutz right on the border named Nahal Oz, and there we learned about the lives of the Israelis. Throughout our tour of the town, we saw tiny bomb shelters staggered around parks and sidewalks, and we learned about the PTSD almost all of the local children suffer from because of the frequent bomb sirens and the fear that at any moment their home could be hit. 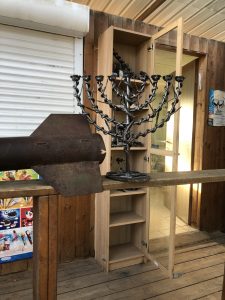 A local Israeli showed our group how an artist transformed a rocket made from a lamppost into a beautiful Hanukkiah.

After a two-hour bus ride, I returned to Jerusalem feeling incredibly privileged to have had the chance to visit this zone of conflict and to speak with people from all sides of the spectrum, and to have learned all that I did knowing I’m not in harm’s way. Spending this year in Israel has helped me make better sense of all that’s going on here, and it has pushed me to see the situation in Gaza as more tangible, as a conflict that today is impacting the lives of millions of innocent people, and as a conflict that is urgently personal and troubling.