COVID has been crashing world economies, demolishing daily routines, and most of all, causing deaths throughout the world. Israel has not been spared, with the country initiating multiple country-wide lockdowns to fight off the spread of the disease. However, Israel has also been leading the world in vaccinations per capita. After high cases per capita, the Israelis fought back resiliently, rapidly dealing out doses to its citizens. Recently, I volunteered at one of these vaccination centers, checking in on post-vaccinated people and giving them refreshments. 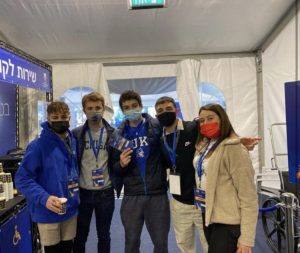 The center was a blur of efficiency, and I was delighted to see how fast Israel was administering vaccinations. I conversed in Hebrew with the people there. Since most of them were elderly and spoke slowly, I was able to understand almost everything. These conversations proved a great measure of how much my Hebrew improved in my time here. As I exchanged stories, part of me was thinking about the current situation in the US, where my own grandmas had been struggling for weeks to schedule a vaccination. It seemed so simple to implement quick distribution of the vaccine, and I was astounded after hearing how slow the process was in America. After personally seeing the efficiency and organization of Israel, my heart filled with pride. Not only are Israelis innovative and determined, but also so genuine and welcoming. As I volunteered, people pulled me aside to chat and asked me about my life, diving straight to deeper conversations without any superfluous chit-chat. I left the center feeling fulfilled and proud.
A couple weeks later, my friends and I did some research and found a place where we could personally receive vaccinations, since they had extra doses that they were just going to throw out at the end of the day. We rushed over, and in ten short minutes, I was through the line and given my first dose. I had received the vaccine before even my own grandparents in America.
It was also exciting to be able to search for the vaccine center ourselves, making our own appointments and deciding when to go. Doctor appointments, insurance, meals, laundry — we had officially been given responsibility over most aspects of our lives. In the middle of January, my friends and I moved into our own apartment. We soon started work, and began independent and fulfilling routines. I had my first day of my internship, taking a thirty-minute bus to an office in Herzliya. The company is called “VeloQuant,” a high-frequency trading firm that creates bots with algorithms to trade stocks by the microsecond. My job was to help code these investing strategies, and I started my day learning about their system and database. I shared an office space overlooking the sea, equipped with two massive desktop computers at my desk. 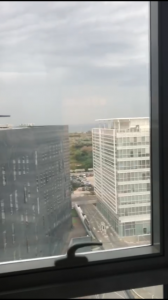 With only four other employees, who were extremely welcoming, I already felt part of the company family. As typical of Israeli culture, my boss conversed with me for an hour, asking about my family life, time in Israel, Jewish identity, and more. He proceeded to tell me about his life, his work, and even mentioned his eight-year service in the army. I had my theories that he was an elite undercover Mossad (Israeli’s secret intelligence) agent, but I didn’t press him with too many questions. I returned after my first day, feeling truly satisfied to finally have a routine along with a unique work experience. But it wouldn’t last long.
The next night, I sat down for Shabbat dinner that ten of my friends and I had been working on for the last couple hours. We had spicy chicken, schnitzel, salad, potatoes, and a variety of other dishes. I bit into the chicken, and found the food surprisingly tasteless. Same with the salad. Same with the potatoes. I had completely lost my taste. We heard later that someone on our program had tested positive for COVID, and a day after my own test, the health ministry informed me about my positive result. After some confusing conversations in Hebrew over the phone, I was asked about my recent contacts and then sent into a 10-day quarantine. I was whisked away to one of our program’s buildings with thirty other kids on the program who also tested positive. I had to contact my fellow employees and boss at work, telling them they had to get tested as well. Even though they tested negative, they still had to enter a ten-day confinement…not the best first impression.
Regardless, everyone is thankfully healthy. I’m working from my computer, studying Hebrew, and working out. While definitely a setback, I will be back out in a few days and ready to restart my routine. As of now, I’m still making the most of my time here and embodying the traits of Israelis: resiliency and efficiency.