By Sammy
Self-confidence. Gratitude. Think beyond yourself. Don’t worry. Don’t be a victim. Master your mind. Over the last 5 weeks, Rabbi Dov Ber taught us these integral steps to happiness as part of his seminars. Through Seidel’s Jewish Information Center in Jerusalem, our program has had the opportunity to listen to the venerated Rabbi Dov Ber’s teachings once a week for free. 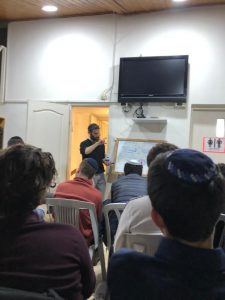 While half of our lessons with the Rabbi consist of topics like God and the Torah, the Rabbi fills the other segment with lessons to achieve authentic happiness. In our first lesson, Rabbi Dov Ber explained to us the idea of feeling good about ourselves for the right reasons. We went around the room, sharing one quality of which we were proud, and we were sent back with homework. We had to list more everyday, as well as qualities that we wanted to refine. In doing this, Dov Ber started us on the path of truly loving ourselves.
This last Saturday, the Seidel Jewish Information Center set up my friends and I with a Shabbat lunch at an Orthodox family’s household. While eating a spicy dish, our hostess taught us a valuable lesson: “Whenever I eat spicy or sour foods, I initially feel displeasure, but I am able to eventually enjoy the taste. This makes me think of the negative qualities that HaShem (God) gave us. Instead of hating ourselves for these qualities, we work to transform and overcome them, and in doing so, we improve ourselves and please God even more than we would have otherwise.” Despite never meeting Dov Ber, this mother had taught me the exact same lesson: focus on improving each individual trait and learn to fully love oneself.
In the second week, Dov Ber taught us the integral lesson of gratitude, focusing on what we have instead of what we do not. Looking over at the city of Tiberias, across the Sea of Galilee, my friends and I shared our immense gratitude to be in Israel.
In the third week, Dov Ber taught us about thinking beyond ourselves. However, to my surprise, he did not ask everyone to immediately begin thinking about others. Rather, he asked each of us to first focus on ourselves, explaining that we are not able to help others if we have not already helped ourselves. Once we have accomplished that, we can focus on others.
In the fourth week, Dov Ber told us not to worry, to realize that we can always overcome a challenge. He told us about his father being diagnosed with cancer, and while having compassion, he did not worry. This appeared somewhat cold to me, but the logic of the reason made sense: if it does not help the situation, why worry?
In the fifth week, he taught us never to play the victim and always to be a winner. Even if we are the clear victim, we should never act like it. In the last session, Dov Ber told us about mastering our mind. He gave us an analogy about taking the bus. If a bus is not going in the direction we want, why get on that bus? We as humans have the tendency to ride with our negative thoughts, letting regrets, what ifs, and depressing ideas take us to darker places. By mentally refusing each of these “buses,” and instead traveling to where we want to go, we can become more positive people.
I took these ideas with me when I stayed with our dear family friend David Coleman for Shabbat. My dad and I first met David in America when we did a magic show/balloon animals for his son’s birthday party. For the first time, I was able to come visit him in his hometown Neve Yaakov. Neve Yaakov is the largest Orthodox Jewish neighborhood in all of Jerusalem — an especially special place to be on the Jewish day of rest. I knew even before arriving that I would be inspired after staying over at David’s. Despite his family suffering a great tragedy, he is still one of the most positive people I know. Throughout the Shabbos, we spent the time studying at the dinner table, playing with his son and the neighbors, praying, and keeping the Sabbath. 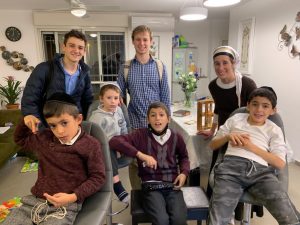 We shared stories, and David explained his mindset on life. In his words, I heard the teachings of Dov Ber, noticing the similar methods of staying positive.
It was also extremely interesting to hear him speak about his lifestyle and the role of gender in his society. He told me of the classes he and his wife both had to take before marriage. These classes detailed the specific roles the husband and wife each need to take on for a successful Orthodox marriage. While someone may hear David and think of his society as sexist, David explained how they simply acknowledge different roles of men and women. It appeared as though the Orthodox community was not saying that men and women were not equal or do not deserve the same rights, but rather thought that men and women were different in their thinking and needs. It was fascinating that every individual took specific classes to outline how to successfully partner with the opposite sex. We talked for hours about our societies, and despite our different lifestyles, David still employed the same techniques that we were exercising to stay positive.
Throughout my time in Jerusalem, studying happiness as well as Jewish values and Jewish wisdom has been truly inspiring. I hope to be transformed by the end of the year into someone that can easily accomplish each of Dov Ber’s steps, achieving long-lasting and deep happiness while benefiting the world around me at the same time.