By James Ziemba in Uncategorized on December 15, 2020. 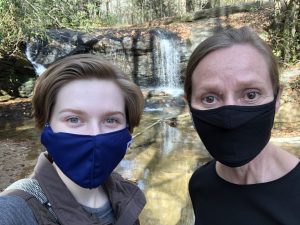 I live in South Carolina, where we have 47 state parks throughout the mountains, the midlands, and the coast, and visiting them is one of my mom’s and my favorite pastimes. During the pandemic, we have been visiting more frequently because this is one of the few ways to get out of the house, have fun, and still stay safe. Most recently, we visited Chimney Rock State Park in North Carolina and the Mountain Bridge Wilderness Area in South Carolina, which includes Caesar’s Head and Jones Gap State Parks.

On our last trip, we had finished looking around Caesar’s Head and hiking a trail across the road, and we decided to hike a trail that was further down the mountain on the side of the road called Wildcat Wayside. It’s a quick and easy trail with beautiful waterfalls and an interesting backstory. Wildcat Wayside, originally called Greenville Wayside Park, is one of a series of six Wayside Parks built in SC in the 1930’s by the CCC and the National Park Service. They were meant to serve as rest sites for those driving motor vehicles along the roads of the state. At the turnoff, you can climb up past the first waterfall to the ruins of one of the original buildings, which is missing its walls but still has its foundation, a working fireplace, and the remnants of a few drinking fountains. If you’re ever in the Greenville, SC area, it’s definitely worth the drive. 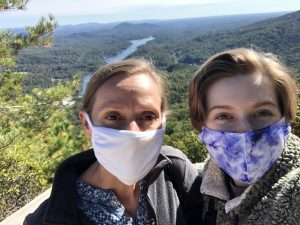 Not only have these trips been a lot of fun, but they are also a great way for me to prepare for the program I will be doing starting at the end of February. I’ll be heading up to New Hampshire for Gap at Glen Brook, where we will be learning about and experiencing a variety of different activities, including orienteering, canoeing, and more. Over the next couple months, my mom and I will hopefully be trying out some more challenging trails and exploring more parks and wilderness areas before I head up north!

← The Silence of the Desert Sincere Happiness →
Duke University