Hebron—a city split between the Palestinians and Israelis, where the air is thick with animosity. While the Hebron Massacre fractured the city more than ninety years ago, the cracks still remain. The 1929 massacre occurred when Palestinian neighbors, infuriated by Israel seizing some of Jerusalem, invaded Israeli homes in Hebron and murdered Jews. While some Jews were hidden by their Palestinian neighbors, almost seventy were killed. Today, 80% of the city is owned by the Palestinians with more than 150,000 residents. Our group travels to the remaining 20%, where despite being owned by Israel, 700 Jews reside among 30,000 Palestinians. While Israelis can be from various religions, all the Israeli residents in Hebron are Jewish and observant. 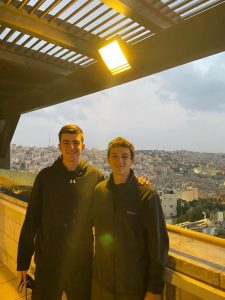 The few Jewish people that reside in the area are outnumbered by the security that they need, and we stop to chat with a few of the soldiers. One soldier, almost as young as myself, tells us about his service in Hebron. He speaks about constant conflict, palpable hostility, and short bursts of violence amid long, uneventful hours.

If I was born in Israel, it could easily be me in that uniform, serving in one of the most heated areas of the Israeli-Palestinian conflict. For some reason, I feel slightly ashamed. I stand across from the soldier, holding a water bottle and my airpods while he held seventy pounds of military equipment, risking his life for the Jewish Nation.

The difference in our two nations’ realities has never felt so glaringly obvious. 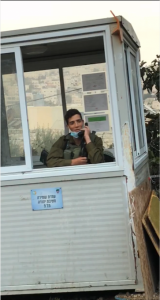 Next, we travel to the Cave of the Patriarchs, one of the most holy sites for Jews and Muslims as the founders of our religions (Abraham, Isaac, Jacob, Sarah, Rebecca, Leah). While immensely sacred, the site also symbolizes another major point of the conflict. Initially, only a mosque was built above the caves, exclusive to the Muslims. However, in 1994, a mentally-ill Israeli

open-fired on a crowd of Muslims praying there, killing almost thirty. After this horrible act was condemned and denounced by Israel, the government thought the next safest step was to add a synagogue at the site. Now the area is divided in two, with the mosque and synagogue split on either side of the graves of our ancestors. Iron bars and glass windows as thick as the tension itself partition the two sides.

Before entering the Cave of the Patriarch’s, I observe the extensive security process, noting how long it takes for two boys to pass through.

I walk towards the entrance with the group, but our guide, Josh, takes a surprising turn towards one of the shops near the entrance of the site. Josh brings out his friend Mohammed, a Palestinian resident in this Israeli-owned territory, to share his unique perspective. While light-hearted and personable, Mohammed speaks of a difficult life, under constant suspicion by Israeli soldiers in the area. I notice an unhealthy cycle, where frequent attacks increase the constant need for suspicion, in turn prompting more attacks.

He continues telling his story, and then answers questions from our group of Americans and Israelis. When asked why he does not simply apply for Israeli citizenship, he tells us of his pride to be a Palestinian, explaining how applying for an Israeli citizenship would feel like betraying his people. He continued speaking, telling us about stories of interrogation, his perspective on the conflict, and disapproval of the actions of Hamas, a terrorist group in Gaza.

While I disagreed with him on topics such as the need for a Jewish nation and how to properly carry out a two-state solution, I wondered again what I would be like if I grew up as a Palestinian in H2 (the Jewish area of Hebron). Under constant conflict with the Jewish settlers and tension with the police, I could have adopted similar views to Mohammed.

As we finished the conversation, I walked away feeling conflicted. On one

hand, hearing Mohammed’s unique perspective was extremely interesting, and it was wonderful to have a logical and respectful discussion. On the other hand, after comparing the opinions and upbringing of the Israeli students in our group to Mohammed, I felt that the conflict was too deeply rooted in both sides’ culture and history to ever be truly solved. However, while these opposing narratives may always exist, sharing perspectives will only aid in finding a solution.

Following our talk, we finally made our way into the Cave of Patriarchs. I walked through the synagogue, perhaps treading in the very footsteps of Abraham Aveinu himself. I peered through the bars into the tombs of each ancestor. 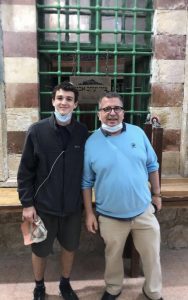 Since the synagogue was built above the caves, I realized the tombs were only symbolic. If this was indeed the burial location mentioned in the Torah, then our ancestors would be below in the caves. We walked down towards the caves only to be met by giant iron doors with countless locks. Here, Josh (our tour guide) explains the intriguing and infuriating story of why no one can enter the sacred caves. I would highly recommend finding the entire story online, but to summarize…

The Muslims believed that the caves should be banned, some not wanting to disturb the ancestors, and some believing that traversing into the burial site would release a demon. Though the Jews, still yearning to enter the caves, returned to Hebron, they were not allowed in. In 1968, the Jews snuck into the caves and began excavating, finding bones, artifacts, and other pieces of evidence that the patriarchs were buried there. After the excavation, the Jews left for the night, planning to return with better equipment. However, Muslims found dusty footprints the next day, sparking widespread riots and outrage, forcing Israel to permanently shut down the caves.

Listening to the story, I am astounded that the sacred caves before me are unexplored, possibly full of glaring evidence that can prove numerous historical events. I cannot believe that we have not fully excavated the area, dying to know the secrets that lay below.

While I have learned about the conflict in various cities, Hebron proves the most striking and informative. I feel more worldly, and my perspectives have expanded significantly, all from witnessing divergent lifestyles and contrasting views amid a splintered, holy city.