As an avid traveller and a French student of seven years, I have always dreamed of studying abroad in Paris. Though I knew that travelling during the coronavirus would make for a very different trip than I had imagined, I was nonetheless excited to take advantage of my free time this year and travel to France.

The first hurdle was to acquire permission to enter France. Under current conditions, all travel from the US to France is restricted except for French citizens and international students– luckily, I had plans to study in Paris, so I was eligible to apply for a student visa. After numerous interviews and months of securing plans for my stay, I was finally able to acquire my visa, which would allow me to stay in France while attending a 3-month course at Sorbonne University. In a year when seemingly all my plans had been modified or cancelled, I was exhilarated that my trip to Paris was at last coming to fruition.

I arrived in Paris 2 weeks before the start of my course at Sorbonne, so I had plenty of time to explore the city. I was surprised to find that in many ways, Paris is just as beautiful as depicted in books and movies. The quaint cobblestone streets are lined with identical, brightly-lit trees, and the distinctive 19th century architecture is sprinkled with thousands of neighborhood brasseries and bakeries. Even my apartment is the picture of a traditional Parisian “chambre de bonne”: a cozy room with a tiny bathroom, a kitchenette, a bed, shelves, and a table all crammed onto less than 15 square meters of creaky wooden floorboards.

In the first few days after my arrival, I set out to discover my immediate neighborhood. Central Paris is divided into 20 “arrondissements,” or neighborhoods, each of which possesses its own unique character. My apartment is in the northern corner of the 14th arrondissement, which is home of the Catacombs and Gare Montparnasse. I spent several days walking through the streets, exploring the local shops, parks, and patisseries until I developed the essential knowledge I would need to live alone in Paris– such as how to navigate the metro station, where to go if I felt unsafe at night, and which bakeries sold the best baguettes.

Once I felt comfortable navigating my immediate surroundings, I decided to explore the city’s most popular destinations. Due to the coronavirus, I was virtually the only tourist at each location, so it felt as if I had private access; the courtyard in front of the Eiffel tower was empty, there was no line to enter the Louvre or see the Mona Lisa, and I was the only visitor at the Pantheon. As a result, I had extra time to visit places that otherwise I would have missed. In fact, perhaps my favorite destination of all was a science museum on the edge of the city called the Cité des Sciences, which I only had visited because I was in the area and had spare time.

I feel so lucky to have been able to spend the month studying in Paris, and can’t wait to continue exploring the city! 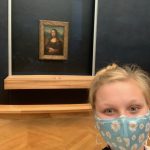 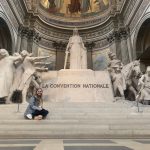 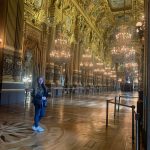