I spent the last few months with friends volunteering on a farm located about 7 miles west of the remote town of Hana on the island Maui.  For perspective, while offering undeniably spectacular views, Kaoli is approximately 2 hours from the nearest grocery and hardware stores, accumulates roughly 400 inches in annual rainfall, and we lived under a tarp. Open tent camping in a lush rainforest overlooking the south pacific sounded rustic to all of us, but challenges presented themselves immediately upon arrival.  After a sleepless first night battling mobile little critters, the roar of intermittent rain bursts and the sounds of creatures lurking in the background, fixing our living quarters became job number one.  We had to turn our bug infested sauna of a rain shelter into something passable for daily living if we had any hope of lasting a week.

The list of projects seemed infinite, so we focused on Maslow’s most basic needs, including food, shelter, water and sleep.  The first task was combatting the bugs, as we emerged from our sleeping quarters covered in what looked like early stages of smallpox, courtesy of some opportunistic mosquitos.  As we compared battle wounds our host informed us that bug nets were a week out at best. We improvised and focused on generating as much air flow as possible through the tent.  We grabbed machetes and hand saws and attacked the inkberry, hoe bush, and mango trees blocking the strong east-facing “Kona” winds that swept across the property.  We used the newly harvested wood to construct a platform to get our sleeping bags off the jungle floor and created shelves for our belongings and built a functional, beautiful table.  The next step was eliminating the ape plant (wild terro) surrounding the tent which generated many puddles of stagnant water birthing millions of mosquitoes.

The next challenge was finding more accessible water.  Bathing would have been nice after being covered in dirt and brush for eight hours each day, but avoiding severe dehydration was the bigger concern. Ninety degrees under a canopy of overgrowth was crushing us.  Our host had previously found a spring about a mile upstream of the property which he hoped to use to irrigate the farm eventually. By tripling the occupants on the farm connection to the water source became imperative.  We mapped out a plan, trudged up and down the mountainside for days, eventually hooking up 2,000 feet of pipe from the mouth of the spring to just above our tent. After battling water pressure issues we installed water tanks halfway up the hill, and before long we had fresh drinking water.  Days later we actually rigged up a shower system with lava rocks as flooring to avoid bamboo foot punctures and palm fronds tied to inkberry railings to obscure the view.

I don’t know if our efforts qualify for a “Home Improvement” episode, but necessity is the mother of invention and before we left we transformed our little slice of rainforest into a glorious one bedroom, half-bath palace, complete with closets, porch, dining room, surfboard and drying racks for our disgusting clothes.   That first night was horrendous, but by week three we were sleeping like babies after adapting to jungle living at its finest. 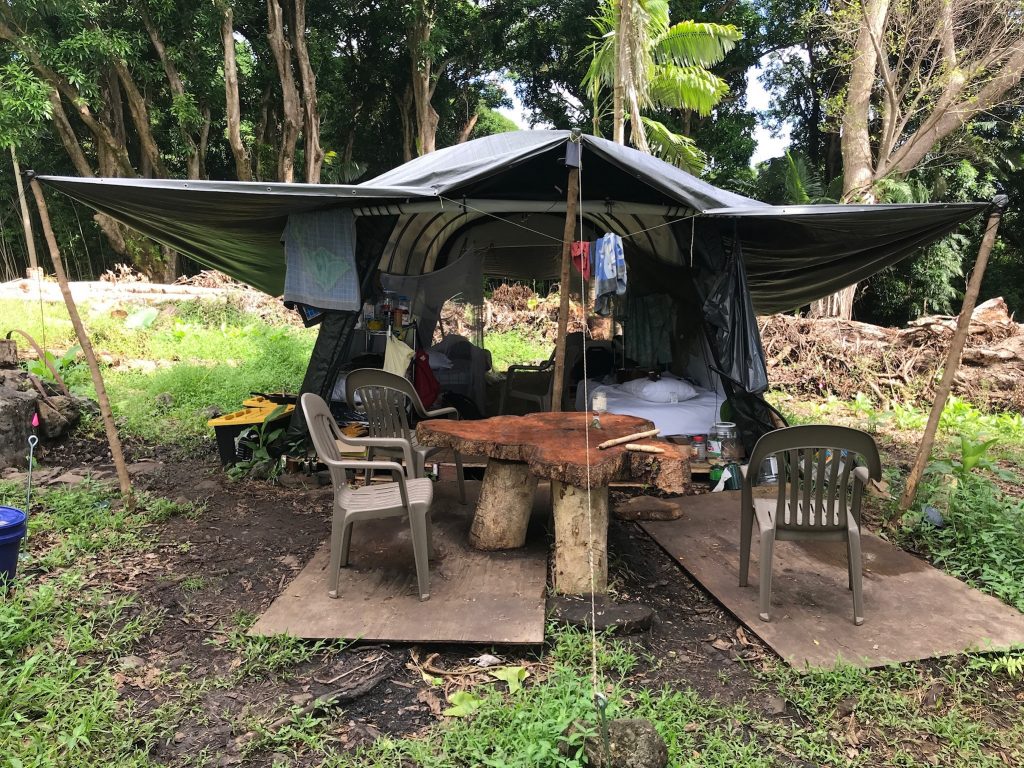