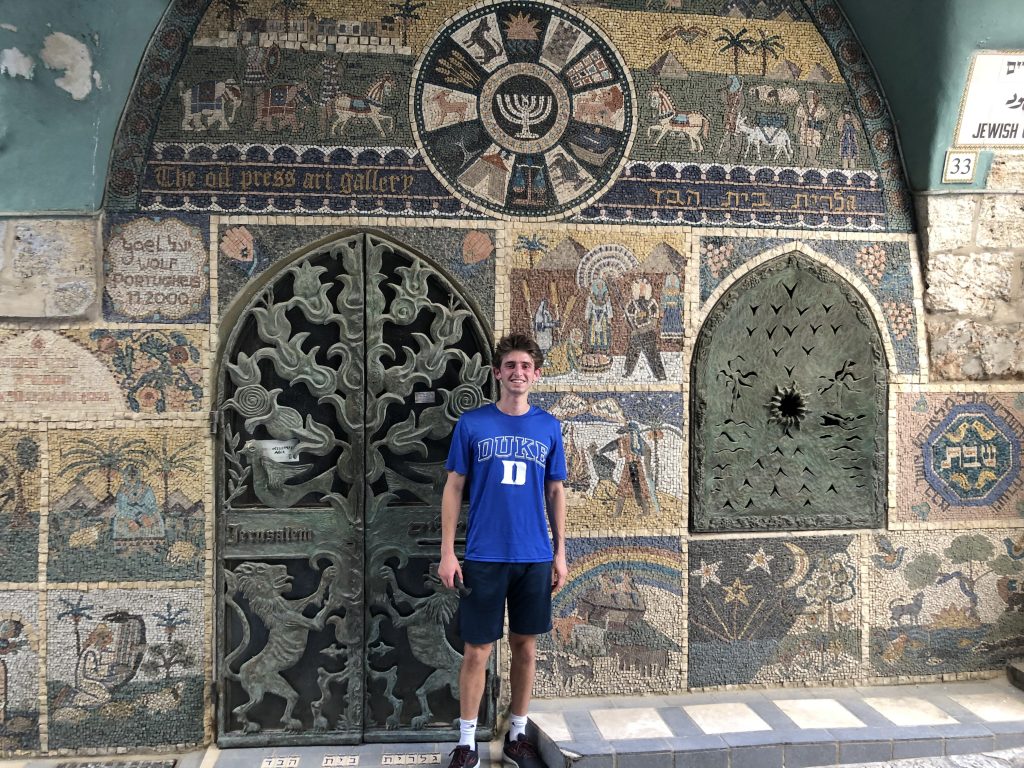 On this quiet Shabbat evening I sit alone on the couch while my new roommates nap. There’s not much else to do at the moment. Jerusalem has restrictions in place requiring American students to quarantine for two weeks, and at times, without proper motivation (and with 108-degree weather), we find ourselves struggling to keep busy. I must acknowledge, however, that I lucked out to be put in quarantine with five guys who, apart from being incredibly nice, like to cook. Although I didn’t meet anyone from my program before getting off the flight to Israel, four of my five roommates were on my flight.

The moment I entered Terminal C at Newark International Airport I was already in Israel. Hundreds of Jews, young and old, crowded the check-in. My parents and I felt shocked both by how few safety precautions there seemed to be in place, but also by how many kippahs and head coverings we saw. While in line to check my bags, a boy with peyes, a button-down shirt, and a kippah introduced himself to me and asked about my plans in Israel. Before letting me answer, though, he began to talk about all of the different Yeshivot (educational institutions where generally more Orthodox Jews attend), where he and his friends were going and proceeded to ask me what I thought of them. “In all honesty”, I responded apologetically, “I don’t know much about Yeshivot or many other religious institutions where Jewish teens go. I’m going to Israel on a pluralistic program because I want to better understand the Jewish community in Israel and become acquainted with a part of my identity that my family and close community cherish deeply.” With that the boy, who seemed surprised by my unfamiliarity, gave me a kind smile and left to check his bags.

After a long awaited and dreaded goodbye from my parents, I proceeded to the gate. Again, I became overwhelmed by the enormous crowd of young Jews as I passed through a second, more intense, round of security. I knew very few people in Israel and didn’t know what to expect from this partially foreign country, so when I watched all the young men congregate together in excitement, talking about all the friends and family they’d visit as soon as arriving, I grew nervous. Of course, I was incredibly excited for the coming year in Israel, but did I really belong? I haven’t gone to Jewish school for six years and have become increasingly more secular as I’ve gotten older. Maybe Israel isn’t meant for me.

Luckily once I got on the plane, I found my friend Maia from home. Her much needed familiar face relieved my growing anxiety, and our long talks during the flight helped me remember why I chose to come to Israel in the first place. We both shared the same intimidated sentiment towards the pack of Yeshiva boys, but the two of us also belong to the same Jewish Latino community in D.C. that has a strong connection to the land of Israel. As I’ve become more secular, I feel as though I’ve started to view my community through an outsider’s lens, and although that has given me new insights, I still want to be able to understand through experience what Israel means to my community. So I’ve come to Jerusalem, the most holy Jewish city in the world, on a program where I’m one of the least religious students, and subsequently it feels a bit awkward. But I know why I’m here, and I believe, regardless of what state the country is in politically and with regards to Covid, that I will experience something incredibly important, worthwhile, and fun.

The last few days have seen the hottest recorded temperatures in Jerusalem since before the founding of Israel…and we have no air conditioning. But somehow this past week has still been one of the highlights of my year. Being locked in a room with five other guys helps you bond in a way that is simply impossible in any other circumstance. Just yesterday, after exercising on my tiny balcony, I did yoga with my roommates, made them a classic Mexican egg dish for breakfast, took a much-needed online Hebrew lesson with them, reorganized our fans into the perfect configuration, played board games for hours, and made banana bread with my five new friends. I participated as best I could as two of them led our room in blessings for our Shabbat dinner and felt incredibly welcomed as they patiently explained to me the customs and blessings that I was unfamiliar with. I’ve known these guys for only one week, and yet I feel as if I’ve grown up with them since early childhood

Unlike some other participants on my program, I have no intention of becoming more religious over the course of this year. Still, I hope to learn from my new modern-orthodox, conservative, reform, and reconstructionist friends about their own customs and beliefs. I originally also hoped to be able to explore Israel on my own during free weekends, but with the recent announcement of a nationwide lockdown, I may have to adjust my expectations for the year. Nevertheless, I find myself more excited now than ever over being part of this program and being surrounded by young adults who, like me, hope to learn from each other and expand each other’s understanding of what it means to be Jewish.

← Embracing My Artistic Side Dang, That Was Unfortunate →
Duke University