In my final years of high school, I felt disconnected from the rest of the world, and felt compelled to understand the cultures and traditions of other countries. I wanted to escape my niche and explore the world and see all the beauty that I have been away from. I knew I wanted to take a gap year, and it was the greatest decision I ever made. Traveling alone wouldn’t have done it, though. It takes work to travel richly, deeply, and thoughtfully. On my travels before then, I encountered a plethora of people extremely different from myself. They were all wrapped up in their phones the entire time, not taking it in the sights surrounding them. I wanted to immerse myself into experiences I have only dreamed of before, and to have real, substantial conversations about the conservation work I was doing with people who had come to it from a very different perspective.

“Don’t you want to start college?”

These were some of the responses I got when I said that I was not going to college right after high school. In truth, it was a hard decision to make. I had doubts, but I wanted to travel and see the world and meet as many people as I could and discover who I was as a person. A learning experience. I had my doubts, though. What would it be like away from all my friends and peers from high school? It was hard to watch my classmates launch into their first semester at college. 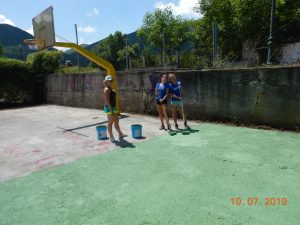 Despite these doubts, I’m so grateful I made the choice to do a gap year. It gave me incredible, once in a lifetime experiences, as well as low points where I struggled. One of my goals was to focus more on giving back rather than on tourism. In Greece, my program was working with our host village to run a summer camp for the kids and one of our tasks was to remodel their community center, so when we left, they would have a nice facility to enjoy. An important aspect of my time in Greece was to avoid barging into this community for a brief amount of time and then leave. We helped the children learn new language skills by doing arts and crafts with them in English. We also helped to create a space they could use for years to come. The community center had a basketball and tennis court when we arrived, but they were falling apart; they were covered in glass and graffiti. We cleaned, painted, and added new nets. Although it was menial work, it was really rewarding to watch the kids see the finished product and know they would have a safe place to run and play around safely for years to come. They kept all the crafts they had made with us, too, but the courts would be for future generations of kids who had been unable to come to the camp. Our gift of time and effort would last for years to come, and it was such a humbling experience. They gave us a gift too, which showed their gratitude towards us and the hard work we put into the community. They opened their homes to us, and we became family. My host family made me feel as if I were at home and they were people I could trust. My host brother and sister assumed the role of makeshift little siblings to me and I created many fun memories with them that will last a lifetime. I am still in contact with my host parents and we message each other from time to time, and I think that is something that is so amazing. We created such a tight-knit bond with complete strangers in ten days, which made the relationship so different from anything else I had experienced. It was something special. 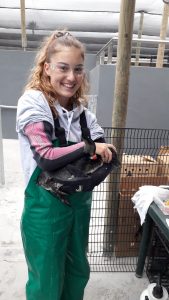 In the next parts of my gap year, I focused more on environmental conservation, as preserving the environment has always been extremely important to me. During my Fall in Australia, we focused on learning and studying predator-prey relationships, and the way the ecosystem has no control over invasive species. We worked hard to bring back the indigenous plants by removing the invasive and harmful introduced plants. I loved being able to ask questions of the people who work in these beautiful places. I’d remove a tangle of weeds, uncover a rock, and then a biologist would explain that rocks are a key part of the ecosystem; reptiles will bask in the sun on the rock, and then their predators will come, too, and eventually the whole system is back in balance. We had to work fast, too; I was there in the fall, when the soil was very dry, and that made removal easier. We knew that if we didn’t hurry, the rains would tighten the grip of the roots and cause even more growth of these harmful weeds.

My work in South Africa gave me a more powerful sense of making a difference than my work in Australia. I worked at a sea bird hospital, tending to injured and sick birds of several endangered species. Feeding motherless chicks on a two-hour cycle, bandaging injured wings, chasing gulls toward the rehab pool who were healthy enough to escape but not healthy enough to be on their own, all felt important. Some days I was exhausted, my hands bruised and swollen from penguin nips, but I was helping save these species. I loved watching the penguins move in the water, so graceful and beautiful, then step out of the water with their clumsy waddling motion. I got to watch birds go from very sick to the rehab stage to the vet check, and when we were lucky, to the release box. Envisioning them waddle out on the beach to live in the wild again was so satisfying. I felt so lucky to actually have an impact like that.

Despite the positives, it was uncomfortable and hard sometimes. I stepped off the plane in Australia knowing absolutely no one. I had never been so far from home, and I was completely isolated. I remember sitting in a room with total strangers who eventually became my good friends. By the time I got to South Africa, I became more confident about being in a strange country far from friends, but I had to deal with a really difficult volunteer, and it really challenged me to figure out how to navigate this unknown country without my family and friends. 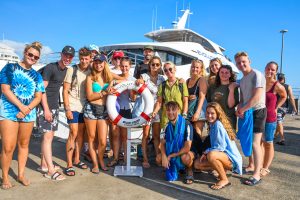 Back when I had just decided to take the gap year, I was nervous of what people would think and what they would say about my choice. When they asked, my response was always something along the lines of, “I want to travel and see the world and learn a lot about myself and the planet along the way.” In truth, though, the experience went so far beyond my high expectations. I have friends literally from all over the world–Amsterdam, Germany, London, Australia, South Africa. I understand the world differently and am forever grateful they helped me overcome the obstacles I faced, and most importantly become my family away from home.