I’ll admit it. My spring semester didn’t go as planned. But then again, in this crazy year of 2020, whose spring has? I thought I would still be in Ecuador during this time. I thought I would be learning Spanish, giving art classes to students, and spending time with my Ecuadorian host family. I thought I would be exploring the downtown of Cuenca or hiking through the highland terrain of Cajas National Park. But here I am, back home because a global pandemic had a different plan for my gap year.

Of course I am disappointed that my time in Ecuador was cut short, but I am also incredibly thankful to have spent the two months I did learning and growing in an international setting. And that growth hasn’t stopped upon returning home. It’s been different for sure, but I’ve tried to continue my path of learning through online Spanish classes and conversations with my Ecuadorian friends and family members. But most importantly, I’ve been keeping up my “studies” of Ecuadorian cuisine.

During quarantine, it seems cooking (and baking) has become the new favorite pastime of many Americans. I have never been a cook (unless you count peanut butter jelly sandwiches and scrambled eggs as cooking phenomena), but I decided there was no better time than a stay-at-home order to try something new. Ambitiously, I decided to recreate several of my favorite Ecuadorian dishes in my American kitchen. 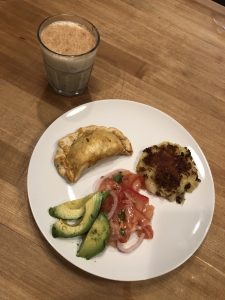 Surprisingly, with help from my family, we accomplished the impossible: a somewhat authentic, astonishingly tasty Ecuadorian meal. I’ve included my adapted recipes; in case you’re interested or have the inclination to become an amateur Ecuadorian chef this quarantine. ¡Buen provecho! 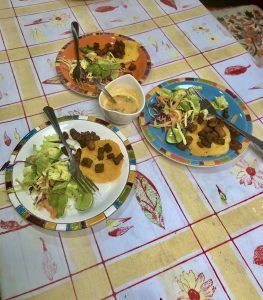 A meal of llapingachos in Ecuador. 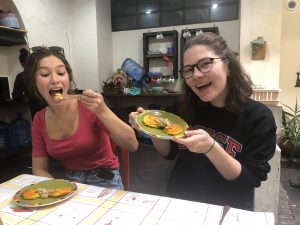 Proud of our first llapingachos in Cuenca!