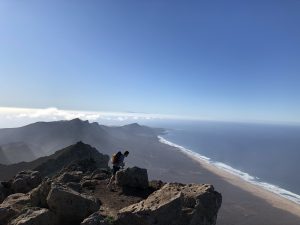 I had many new experiences during my gap year, I lived on my own for the first time, I took college courses in Spanish, I met new people and tried new things, but the takeaway that I will carry with me for the rest of my life is the importance of taking advantage of opportunities when they arise. Last summer, my plan was to live in Spain from late August until April. I was going to play hockey and take classes. By December however, I was a different person who wanted different things. I changed my original plan as new opportunities came up. I missed class to travel to Milan, Zurich, and the Canary Islands. Before I left for these trips, I often considered that I could just go some other time in order to not miss class and stick to my plan. These small adjustments had prepared me for the most consequential change to my plan that I made, the decision to forgo the rest of the hockey season and another semester of classes in order to go on a NOLS trip to Patagonia. Again though, I nearly didn’t do it. I felt like I was abandoning my original plan, like I was giving up, like I was failing. Even after I put down the deposit for the trip, I still felt like I had failed. It actually wasn’t until I was in Patagonia that I realized that it is not failure to change plans. I had grown over my gap year, and as a result I was ready to experience new things. I found an opportunity and I went with it, and as a result I had one of the best months of my life.

If you are planning to take a gap year, I guess what I am trying to say is that it is hard to tell who you will be 6 months from now, especially during a such time of personal growth and change that a gap year is. So, if you are part way into a plan that you made months ago and you begin craving something different, you should go with it. You haven’t failed or by changing your plan, you have actually grown to the point where you are ready for new experiences. This growth is much more meaningful than putting your head down and sticking to a plan that you made back when you were a different person.