If you are taking a gap year and enjoy the outdoors, you should definitely go on a NOLS trip. I went on the NOLS Patagonia cultural expedition which was probably the highlight of my gap year. Having spent the previous 4 months in Spain, not only was I able to enjoy the wilderness, I was able to form deeper connections with the community along the way. These people included Chilean border patrol stationed on a lake that crossed over into Argentina, gauchos (Chilean cowboys), and pobladores (people who settled Patagonia). Not only did I learn about the current culture of Patagonia, but I also learned about the history, and the parallels between the Chilean/Argentinian settlement of Patagonia and the settlement of the American west.

This may sound a bit cliché, but the trip was a reset for me. I was with completely new people in a completely different place without my phone, which usually ties me to the world I know. Going into the trip I reasoned that anyone who wanted to spend 30 days in the Patagonian wilderness was someone I wanted to know, and I could have not been more right. I made friends from all over the country and world, some who I would have certainly seen more of if it weren’t for the pandemic.

If I boil down what really made this experience so fantastic it really comes down to the sheer number of experiences that the trip presented. I had not spent a full month without my phone since 8th grade. I learned just about everything there is to know about backpacking, and even earned a Leave No Trace Trainer certificate. I learned the proper way to make and serve maté, the unofficial official drink of Patagonia. helped a poblador named Oscar lasso a lamb, then watched him slaughter it and cook it over a fire to make the a traditional Patagonian asado. This experience was an especially fascinating one for me because it really made me think about eating meat. The way Oscar killed the lamb was the most humane way imaginable, which has made me more conscious about where the meat I eat came from and how it was raised and killed. It was also fascinating purely because of how unexpected it was. Finally, spending all that time and sharing these experiences with a group of strangers who all became friends makes me really excited for college. I grew up in a small town, so I haven’t really met anyone new since elementary school. I know almost no one going to Duke next year, but I can’t wait to share the experience of college with everyone.

It’s a bit odd that I haven’t written much about the hiking or the camping, but I think that is because those activities, while they take up the majority of your time, are really just a back drop for the rest of the experiences you have on a NOLS trip, so seriously, if you like the outdoors, there is nothing I can recommend more that you do on your gap year.

It occurs to me though, that a prospective NOLS student may be curious about the actual hiking and camping experience, so I will now share. The course lasted 31 days. Over the course of 28 days we hiked approximately 120 miles. On the first two days of the course, we looked at our route, packed up the provisions that we would eat over the next month, learned how to pack our packs, and then drove about 9 hours in a van to our starting point.

The hiking was broken up into 3 sections: 12 days, 9 days, then 7 days. We had to make our way to pre-determined re-ration points, where we would meet up with gauchos who would deliver our food and fuel for the next ration. A 12 day ration is long, so when we started out, my pack weighed about 68 pounds, the majority of it being food. Throughout the first ration, the instructors really acted as teachers. They taught us how to navigate using a map, compass, and GPS, how to choose a campsite, and most importantly how to get creative with the limited ingredients that we had brought. As the days passed, they gradually handed most of the responsibilities over to us. We would determine how far we would hike in a day and when we would start, as well as split our group of 15 into 3 self-sufficient hiking groups, which meant that if we got separated by night fall each group would have everything they needed, which happens more than you would think. In fact, the day before the first re-ration, 2 groups couldn’t find the trail, decided to bushwhack, and it took 4 days before my group of 5 met back up with them.

The rest of the expedition went much more smoothly. No one got lost and we started independent student group travel, where we would hike without the instructors. At this point we had learned so much about trail finding and map reading that it really was no problem at all. The next two re-rations were also much more cultural, as a I wrote about above. We met gauchos and pobladores, and shared many cups maté and stories. When we weren’t with the locals, the typical daily routine was wake up, make breakfast, hike for 6-10 hours, make camp and dinner, relax, then go to bed. But trust me, even though that takes up a lot of time, it goes by fast. Hiking really is one of the best times to have a conversation, and when you’re with a group of people that you just met a few weeks ago it if difficult to run out of topics.  NOLS runs trips all over the world, so this experience defiantly won’t be identical to any others. So again, if you like the outdoors, a NOLS trip is one of the best ways to see a place you travel to, so I hope you will consider one during your gap year. 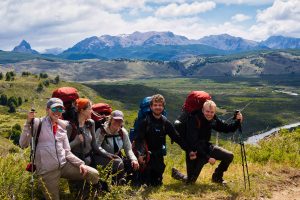