I have come home from Buenos Aires with a strong desire for one thing: choripán. The delectable dish consists of grilled or smoked chorizo sausage, perfectly crunchy bread, and toppings such as gooey cheese, lettuce, and coleslaw. My favorite place to grab choripán, apart from every other street corner, was a restaurant called Chori in Palermo Soho. No writing could possibly evoke my love of this restaurant, or the gourmet smoked chorizo and interesting sandwich combinations offered on the menu. If you’re going to Buenos Aires, Chori is life changing. 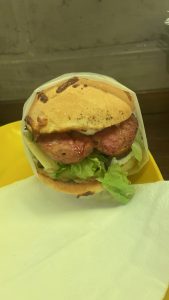 Choripán from Chori!!! I’m ready to board a plane just to get a bite.

The list of mouth-watering foods I tried in Buenos Aires is extensive, but some of my favorites included alfajores, a cookie filled with dulce de leche; faina, a chickpea pancake; provoleta, a round of grilled provolone cheese; and empanadas, delicious pockets of bread filled with meat, cheese, or onions. The portions in Buenos Aires were as generous as the people in the city, which is to say very generous. Of course the steak and chimichurri were continual highlights at the dinner table; I once went to a restaurant that included three different kinds of salt to season a slab of tender meat with.

Apart from the food, which could merit a whole blog post on its own, I enjoyed walking around the very sizable, very warm city. I was not prepared for the immensity of the port city, nor the variety and distinct identity of every neighborhood within it. The neighborhood I lived in, called Palermo, was a decidedly hip and vibrant neighborhood, packed to the brim with fun coffee shops, brunch spots, bars, live music venues, and trendy shops. Recoleta, a nearby neighborhood, had incredible green spaces, historic street markets, museums, posh restaurants, and stunning French-inspired architecture. Puerto Madero had beautiful modern architecture, being the newest neighborhood in the city, with a sleek bridge outlining the shape of a woman dancing tango. Each neighborhood had a different intrinsic quality that separated it from other neighborhoods. I’m not sure I could say I got to know the entirety of Buenos Aires, but I did come to know small pockets the city allowed me to see. I could spend years discovering new things on new street corners in new neighborhoods, and never tire. 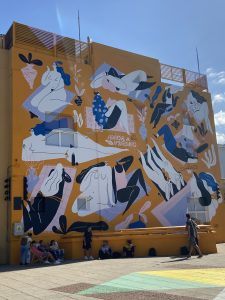 A mural on the side of the cultural center in Recoleta

Of the small nooks I was able to see, I discovered lots of beauty, diversity, and history. I loved wandering the various street markets for locally produced goods such as paintings and maté cups. I loved touring El Ateneo Grand Splendid, a theater-turned-bookstore that took my breath away. I loved touring the Zanjón, a passage of underground labyrinths on the site of the first Buenos Aires settlement in 1536. I loved visiting the cultural center in Recoleta to watch dancers practicing choreography, or attend showcases of young local artists. One of my favorite experiences was going to La Bomba de Tiempo, a Monday night percussion-only concert. I never expected to dance in the rain until two a.m. on a Monday night, but these experiences are what gap years are made of! 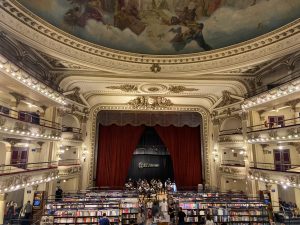 I would be missing a key highlight of my experience in Buenos Aires if I didn’t talk about my time as an intern for Fundación La Alameda. La Alameda is a non-profit serving the community in Floresta, a neighborhood near the outskirts of the city. The organization has evolved from their beginnings as a soup kitchen to a multi-hyphenate project fighting against child labor, sweatshops, human trafficking, and much more. Their slogan, “Ni esclavos, ni excluidos,” translates roughly to, “Neither slaves, nor people excluded.”

On my first day as an intern, I was plunged straight into the La Alameda world. I was happy that they took me seriously as a young, American intern and entrusted me to translate a document on human organ trafficking from English to Spanish. It was certainly an interesting, albeit disturbing, first day, but I was eager to help make information on such an important topic available to a wider set of people. I worked on many translation projects throughout my 6-weeks in Buenos Aires, and also researched global public policy and laws surrounding human trafficking and prostitution, and conceptualized ways to apply similar practices in Argentina. I was also able to compile a spreadsheet of information on potential hot-spots of prostitution and human trafficking in the city. The office was small and I was the only intern braving the (at times suffocating) summer heat in the city, but I enjoyed spending time with my coworkers and the daily office maté break, the national drink of Argentina. 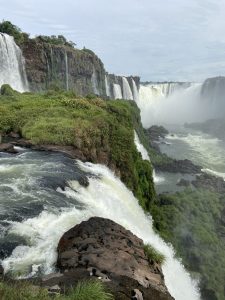 The most memorable experience for me in Argentina had to be my trip away from the city (however much I loved it!) to Iguazú. I was nervous to travel by myself for the first time, but the wonders of the Iguazú waterfalls, a UNESCO world heritage site spanning both Argentina and Brazil, outweighed any doubts I had. The photos I had seen online could not have prepared me for the enormity or power of the cataracts, comprising around 275 waterfalls. Standing at the edge of the largest waterfall, the “Devil’s Throat,” I was completely and utterly at a loss of words. The grey mist obscured the bottom of the falls and sprayed upward, shrouding the surrounding greenery and cliffs with mystical clouds. The roar of the water surged at a speed I could not have anticipated. Looking into the milky mouth of the waterfall I felt tiny and irrelevant in comparison; a small speck observing this beast of nature. The devil’s throat is certainly a well-deserved name. Later in the day, I took a boat ride through the Iguazú river, coming so close to the waterfalls that I could taste their spray. We were able to sail directly beneath one of the smaller waterfalls, completely drenching the boat and everyone on it.

In Argentina, I explored street art; took a tango class; attended the international student organization’s “American”, but not very American, themed parties; studied Latin-American art at MALBA; went thrift shopping on rooftops; learned about Argentine politics, notably about Peronism; and had an unforgettable solo venture to Iguazú in Argentina and Brazil. All of these adventures and discoveries elapsed over the course of a short six weeks, and Buenos Aires only allowed me a narrow glimpse into the happenings of such an enormous city. I’m excited to return and uncover new treasures and revisit the old.