Acostumbrarse. The Spanish verb for becoming accustomed to and also one of the first words I learned upon my arrival in Cuenca. Within those first few weeks of learning to live with a host family, speak a new language, and maneuver an unfamiliar city, I thought that I would never become accustomed to this strange new way-of-life. At times, I felt almost overwhelmed by the amount of challenges I faced on a daily basis. Luckily, within my first six weeks of being in Ecuador, I got to experience the levity and merriment of Carnaval, one of the biggest holidays celebrated in Ecuador and in South America. Due to this festival (and the copious amounts of pan con dulce de leche that I consumed), I was able to overcome many of the stressors of cultural adjustment and begin to truly enjoy the breadth of Ecuadorian culture.

Carnaval is a momentous occasion here in Ecuador. Back in January, when I first moved in with my host family, they were already discussing their plans for Carnaval: where we would go, what we would eat. It was not a matter to be taken lightly. In the weeks leading up to the festivities, our house became a storage center for water guns and cans of carioca, or party foam. Bottles of Coca Cola and Pilsener began to collect on our porch. 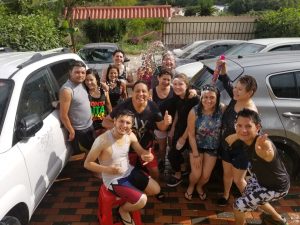 Then, on February 15th, about a week before the official start of Carnaval, my host family and I traveled an hour outside of Cuenca to the Valley of Yunguilla. Here, we met up with thirty other family members from all over Ecuador. For me, this was when Carnaval truly began.

Upon our arrival, and as we unloaded the seemingly endless amounts of food and drink from the car, several of my host family members began to set up a station where we were to “play Carnaval.” I’ve learned since then that “playing Carnaval” can take many shapes, but for my family, it involved becoming a “human mess” and then eventually getting “cleaned” of all the gunk that covered us.

At first, I had no idea what was going on, but once my tío oh-so-gently threw chalk into my face, my tía sprayed the entirety of my body with carioca, and a family friend rubbed some avocado on my cheeks, I began to understand the whole “playing Carnaval thing.” Or so I thought… Because once I was covered in chalk, foam, and avocado, I was rushed over to a stool where a trash can full of water (and shoes, for some reason I have yet to uncover) was dumped over my head. 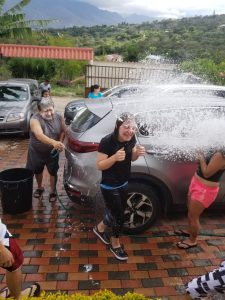 Then, these steps were repeated again and again for every person until the sun began to set and the combination of our wet clothes and the nighttime breeze made us shiver and rush over to the hot tub. And while I thought then that the party was over, in reality, it had only just begun. Shortly after our escape to the hot tub, five hours of karaoke began as my host family members fought over the microphone and danced to every new song.

And after that, a week of Carnaval activities followed. My favorite activity? Jueves de Compadres y Comadres, or the Thursday before Carnaval when the people of Cuenca gather in a plaza in order to spray carioca into each other’s faces (aka eyes). Thankfully, I wear glasses and had some semblance of protection. Others were not as lucky.

Following the events of the previous weekend and Jueves de Compadres y Comadres, I had imagined that the weekend of Carnaval itself would be nothing short of crazy. But after watching a parade in the city center of Cuenca, where (surprisingly, I know) there was more carioca and chalk, my weekend was spent relaxing with my host family. 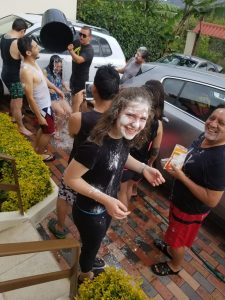 We traveled to Yunguilla, ate traditional foods such as cuy (guinea pig) and Mote Pata (an Ecuadorian soup only served during Carnaval), and played board games. This togetherness and family bonding time was one of my favorite aspects of Carnaval, as it helped me strengthen my familial relationships and I learned my new favorite board game: Rummy-Q.

While completely crazy at times, I am so thankful I got to experience Carnaval here in Ecuador. The time I spent immersed in all of its festivities, from being sprayed down with foam to eating a traditional soup with my family, was time I spent learning more about the Ecuadorian culture and abandoning the stress of acclimating to a new, unfamiliar place. And after experiencing the fun-loving, carefree attitude of Carnaval, I have decided to adapt certain elements of that attitude into my own mindset as I look toward my next three months here in Cuenca. 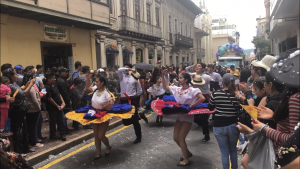