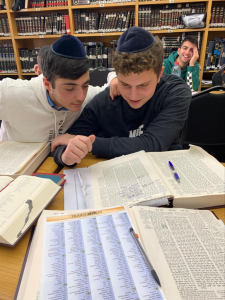 With my chevruta (learning partner), I am learning Talmud, specifically the tractate of Bava Kama, which is a book of Jewish law that discusses civil matters and deals with rules of damages.

When I first planned my gap year last spring, I thought that, having gone to SAR High School, a Modern Orthodox Yeshiva, I wanted to step out of the Yeshiva world and experience new things. So I picked Hartman, a pluralistic, co-ed, Israeli and American program, believing that going there for the year would be a great way to open up to new ideas and perspectives. While this idea sounded great in theory, I would soon realize that this was not the only thing I wanted my gap year to look like, in that my Jewish learning and spirituality were just as important and interesting for me to develop, not just studying political theory, literature or politics, subjects I could study with great excitement and depth at Duke. I missed many intellectual and spiritual things about yeshiva life, from the big things like the challenges and rigor of Gemara learning, analytic and rigorous text study and spiritual prayer, but also all the small things like “tishes” (small gatherings where singing of hymns and spirituals would take place), or even just the Yeshivish vibes which are so comforting, yet so hard, to try and explain.

One of the biggest reasons I wanted to join Yeshiva is the sense of community. There were a lot of group activities at Hartman and they really tried to integrate all groups, but in the end I felt as though we were all too different from each other to feel like a true community. I really missed the relationships and deep connections I created with my teachers and Rabbis at SAR, and I knew that such relations are at the core of my new program, Yeshivat Aish Gesher. Being with people who are very different from me, in terms of culture, values and language led to my creating some great friendships at Hartman, but I missed bonding with people over a shared culture, values and experiences.
At Aish, this creation of community is done within the context of intellectual growth. For example, I am excited that at Aish there is an emphasis on programs which explore the logic of Judaism, the relationship of contemporary science to traditional Jewish modes of thought, and the tension between belief and rational thinking.
I came to realize, a bit late, that this should be a year for me of immersion in Talmud, Torah and Jewish text, coupled with spirituality and warm communit 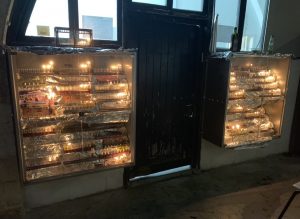 For Chanukah, each member of the Yeshiva lit his own menorah and set of candles. While we each lit our own menorah, we came together as a community to light at the same time, said the prayers together, and sang chanukah songs.

y building. This focus will give me a powerful tool with which to face the exciting challenges of college next year and beyond.