I’d like to discuss something very close to my heart today: food. Senegalese food, to be exact. I promise you that each dish will leave you begging for the recipe– and you’ll want them all. Especially the street food one’s because street food is just so good here. And no matter how often Americans tell you to eat street food at your own risk, when you spend 150 CFA on a spaghetti, onion, and pea filling for your daily ½ a baguette, you will know that Senegalese food, quite simply, rules.

Walking down the street you’ll smell deliciousness before you can see it: small fatayas and beignets fried in oil; peanuts cooked in hot sand over a fire; and Senegalese-style eggs called “omelets” (fried eggs with onions and crushed-up bouillon blocks for spice). And then there are the foods you can’t smell: the frozen bissap in tiny plastic bags you get after school; the thiagri (cold yogurt with uncooked millet) before or after dinner; and the unknown fruits that you can’t wait to take a bite out of.

But remember! No walking and eating. What I’ve realized in Senegal is that the United States is really such a fast-paced society. In my small town of around 5,000, walking and eating is a no-go. You don’t do it, ever. Unless you want to face the wrath of your yai!

But while inhaling street food is in my nature, Senegalese meal time is not. That doesn’t mean I don’t love it, I just mean it’s different. At my house we sit around a large plate with raised sides,– essentially a huge circular casserole dish with another huge circular casserole dish flipped on top of it– and we all eat out of the same plate at the same time. Then, under the plate, there is a mat with a picnic-style blanket on top of it that serves to catch all the excess food that doesn’t reach your mouth fast enough. When lunch is ready you’ll hear “Kai! An!” which means come and eat lunch in Wolof. And when the plate gets put down on the mat, slowly the people will come. Your siblings, friends, and parents will dip their right hand in the water bowl, take off their shoes, and grab a spoon if there are any. Then the top plate is picked-up and the feasting finally begins.

During the meal though, there are a few incredibly important things you must remember. 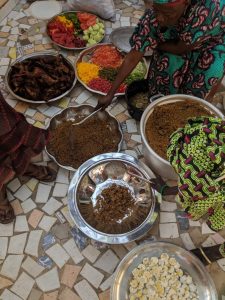 Second, you also better get used to having food thrown at you. Well, not exactly thrown at you, but gently tossed in your direction. Let me explain. When the food is placed on the plate, the rice goes down first, then the crispy rice in the middle of the plate, and then the fish and vegetables are put on top of the crispy rice. The vegetables change according to the season and right now (December), we usually have one carrot, one cabbage cut in two, a piece of squash, one potato, and two pieces of tapioca with fish and rice. Since we’re all sitting in a circle around the plate, you’re likely to only have one or two vegetables in front of you. That’s where the tossing comes in. The oldest women at the meal will usually eat with their hands and they will pass you the “good stuff.” Say you’re placed on the opposite side of the cabbage and you’ve been craving cabbage all day (I’m not joking it happens here!), the oldest woman will break you off a piece of cabbage and toss it in your direction. It’s tossed not placed because they are usually doing this for six to fourteen people at a time, and, I mean, they have to eat too!

Third, remember that even if you don’t like what has been placed in front of you vegetable-wise, it will be okay. The person dividing the food will learn what you prefer quicker than you think possible. At my house we have Chep bu Ghin (the dish I described above) for lunch about four days a week, and I always get passed pieces of carrots, potatoes, and cabbage, and I never get passed okra or fish. I’ve been getting the same thing for almost four months, and they always get what I enjoy eating right. And even if you’re not the biggest fan of a meal, I promise it will grow on you. Well, at least most of them. There’s always going to be that one meal that you dread (mine’s “Soup au Kanyay” or white rice with an oily fish and okra sauce on top).

Fourth, when you’re full don’t wait around. Put down your spoon or wash your right hand in the water bowl and head-out. I always head straight to my room to blow my nose and drink some water because our food is so spicy! People are usually packed around the plate like sardines, so if you’re sitting there not eating because you’re full, you are literally, at that moment, a waste of space. Get up and leave and allow your family a little breathing room. For example, today at lunch we were eleven around the plate, and, if people didn’t get up when they were full, I would have been so squished that I wouldn’t have been able to fit any food in me!

Finally, number five. Don’t worry that you won’t get enough food, I promise you will. You’ll probably get more food than you can eat as Senegalese culture pushes eating constantly and people will look at you disappointed when you say “Soug naa” or “I’m full.” Even when there are fourteen people around a bowl, there is always enough food. I swear it is impossible to go hungry here. No matter if someone you’ve never seen (and will never see again) comes by the house and asked for a plate of food by singing, you will still have enough. Even if five people stop by to drop-off bags of onions on their route and your yai says “Kai! An!” (which she will say to whoever shows-up around lunchtime), and they stay to eat, there will still be enough food. Let me be clear when I say that you will never be hungry here and both of these situations have happened to me. And I would suggest that in the unlikely chance you are hungry, go and buy something for yourself. Just trust me on this one. Because if you say you’re hungry, you’ll be having three dinners that night, and you’ll have to finish them all. 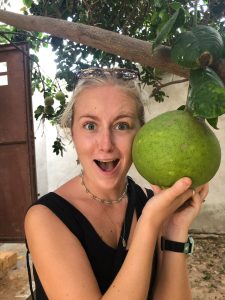 From Maffe, to Yassa Ginard, to Chep bu Ghin, to Chep bu Yapp, to Chep bu Nyibby, to Ndambe, and to all the other dishes, Senegalese culture is full of spice, heat, and (almost always) pounds of rice. And while in the US we complain about having to spend thirty minutes making dinner, Senegalese lunch starts being made around 11:00 and is finished at 2:30, when we eat it. But honestly, that’s what makes Senegalese food so good– you can taste the hours and care that went into making the meal. You can taste the delicately fried onions and fish; you can taste the scallions, pepper, and pink spice that were “dubb” or grounded in the mortar and pestle; and you can taste each morsel of rice that was steamed over than sauce than added to it. And I want you all to taste what I’m describing– I really do. But, unless you come to Senegal and stay for a while, I don’t think it’s going to happen. Because learning to “dubb” with both arms and how to identify what a sauce needs by smell alone are things a recipe can’t teach you.

On flexibility and planning a gap year

When I first planned my gap year last spring, I thought that, having gone to SAR High School, a Modern Orthodox Yeshiva, I wanted to step out of the Yeshiva world and experience new things. So I picked Hartman, a pluralistic, co-ed, Israeli and American program, believing that going there for the year would be a great way to open up to new ideas and perspectives. While this idea sounded great in theory, I would soon realize that this was not the only thing I wanted my gap year to look like, in that my Jewish learning and spirituality were just as important and interesting for me to develop, not just studying political theory, literature or politics, subjects I could study with great excitement and depth at Duke. I missed many intellectual and spiritual things about yeshiva life, from the big things like the challenges and rigor of Gemara learning, analytic and rigorous text study and spiritual prayer, but also all the small things like “tishes” (small gatherings where singing of hymns and spirituals would take place), or even just the Yeshivish vibes which are so comforting, yet so hard, to try and explain.

One of the biggest reasons I wanted to join Yeshiva is the sense of community. There were a lot of group activities at Hartman and they really tried to integrate all groups, but in the end I felt as though we were all too different from each other to feel like a true community. I really missed the relationships and deep connections I created with my teachers and Rabbis at SAR, and I knew that such relations are at the core of my new program, Yeshivat Aish Gesher. Being with people who are very different from me, in terms of culture, values and language led to my creating some great friendships at Hartman, but I missed bonding with people over a shared culture, values and experiences.
At Aish, this creation of community is done within the context of intellectual growth. For example, I am excited that at Aish there is an emphasis on programs which explore the logic of Judaism, the relationship of contemporary science to traditional Jewish modes of thought, and the tension between belief and rational thinking.
I came to realize, a bit late, that this should be a year for me of immersion in Talmud, Torah and Jewish text, coupled with spirituality and warm communit
y building. This focus will give me a powerful tool with which to face the exciting challenges of college next year and beyond.
Duke University