By Leslie in Uncategorized on November 27, 2019.
It’s been a month since I first arrived in Israel, and the experience so far has been unbelievable. For the first week, I stayed in the small desert town of Sde Boker, which is probably best described as a desert oasis. For someone who hasn’t been to Israel before, let me set the scene for you; you exit Ben Gurion Airport and you are immediately greeted by the skyline of Tel Aviv Beach to the west. To the east, after an hour bus ride, you’d approach the hills of Jerusalem. But, to the south, you see pure desert. As I glanced out the window of the tour bus leaving Tel Aviv, I saw the tall skyscrapers of Tel Aviv disappear as mountains of sand appeared and camels walked along the highway.
Still, I was excited to arrive in Jerusalem, where the majority of my gap year would take place. It’s not that I didn’t absolutely love my week in the desert, but after a four month-long summer where I worked in a restaurant six days a week, I was ready to get my gap year into full gear. Even though I have been to Israel many times before (I have a lot of family living here), the moment I stepped off the bus in Jerusalem felt just like the first time I had been to the city. I was relieved, excited and just plain happy. My gap year, that I have been looking forward to for years, had just begun.
Now, four weeks later, I’m packing up to leave Israel for my first trip abroad. Let me explain. 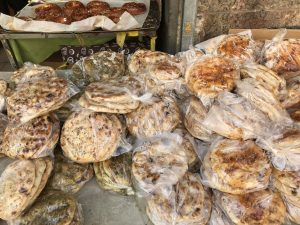 Kivunim, my gap year program, is a mix of classroom learning and field learning. One aspect of the curriculum is learning both Hebrew and Arabic, even though I’m already fluent in Hebrew. The second focus is to develop a better understanding of Christianity, Judaism and Islam. So, every four weeks, the entire group of fifty-five students will be taking a trip outside of Israel (this first trip is to Greece, Bulgaria and Turkey) where we will learn about these religions outside of our Jerusalem-centric lens.
But because I haven’t actually traveled anywhere outside of Israel yet, I figured that I’d focus on my time in Jerusalem. You can probably imagine that living less than a half mile from the Church of the Holy Sepulcher, Kotel (Western Wall) and the Temple Mount has its many perks. Just last week, we spent an entire afternoon analyzing the similarities and differences between Jaffa Gate (in West Jerusalem) and Damascus Gate (in East Jerusalem) in the Old City. 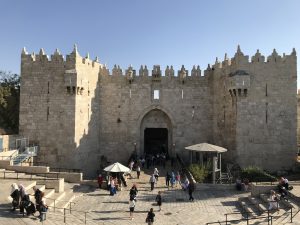 I was fascinated by the diversity of these areas, but was also aware of the very subtle differences between these two areas. For example, Damascus Gate was surrounded by stores and markets with all-Arabic signage, while at Jaffa Gate I found over five languages displayed (Hebrew, Arabic, English, Russian and Spanish). As I sat observing my surroundings, I wondered what this signified and what I should take away from the visit.

While the academics have been great, I’ve also found a lot of time to explore and engage in modern Israeli culture. I spent last weekend in Tel Aviv (which, by the way, feels like a totally different world than Jerusalem) with all of my friends. Yesterday, in Jerusalem, I went to an Israel vs. Poland soccer game, where I really got a sense of true Israeli culture.  I’ve never been to a soccer match before, so when the Israeli team was playing badly and HUNDREDS of paper airplanes began flying onto the field, I was totally confused (apparently, in soccer, fans throw paper airplanes onto the field when their team is playing badly). I was in the very top row of the stadium, so my paper airplane had no chance of making it to the field.

I have to be honest— the worst part about being in Israel so far is that Duke Basketball games air at 2 AM, which is pretty rough on my sleeping cycle. I’m usually tired for class.